British Shorthair at a Glance 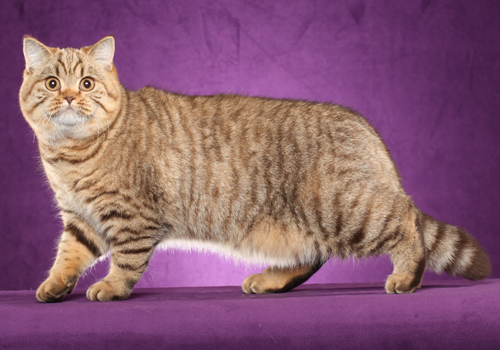 About the British Shorthair

In line with their British heritage, the breed is slightly reserved, but once they get to know someone they have no trouble showing affection.

Male and female British Shorthair cats differ a bit in personality. The happy-go-lucky males command respect but welcome attention from everyone, while the more serious females are true British ladies expecting proper form and etiquette from those whose they accept. These loyal and devoted companions cats but want to be where you are, snuggling up beside you on the sofa. Often resembling a sturdy teddy bear, the British Shorthair’s smile and a plush coat combined with their wonderful disposition makes them great family pets.

Originating as a hunter and protector of food supplies for Roman soldiers when they invaded Great Britain, the British Shorthair now prefers cuddling with their families and occasionally playing with toy mice.

British Shorthairs are known to be loyal and devoted companions. They are not lap cats, however and prefer quietly snuggling beside you on the sofa. While not very active cats, they do have their occasional “mad” moments where they like to act like kittens. These intelligent cats are quiet and unobtrusive, ruling their indoor kingdoms with a calm demeanor. They definitely look before they leap and do not engage in high-flying acrobatics. They are tolerant with children and dogs, but do not like to be carried around. Exerting their independence, they are content with their own company and have no problem quietly amusing themselves in your absence and waiting patiently for your return. 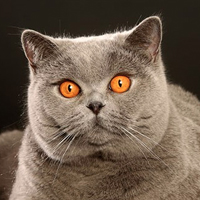 The British Shorthair coat is short but very dense. Combing with a wide-toothed metal comb once a week will help reduce shedding during a change of seasons. Aside from aging cats, most British Shorthairs are capable of bathing themselves unless their coat becomes soiled with something that would be harmful to lick off.

Keep their nails trimmed every two weeks and their ears cleaned and teeth brushed regularly with a vet-approved pet toothpaste. A tall scratching pole is also recommended to help their natural scratching instinct.

Adult British Shorthairs are calm and therefore need less food than most would expect given their size. Feed adults twice daily on a regular schedule (preferably wet food high in meat content) while kittens should be fed more frequently. Free feeding is not recommended to discourage cats from eating when they are bored. Use only treats and food without sugar.

As with all cats, it is important to give them fresh, clean water daily so they don’t hesitate to drink. The water bowl should be placed at least three feet away from any food. Cats’ noses are sensitive and an overwhelming smell of food may cause them to drink less.

The British Shorthair breed is known to be very robust however, as with all cats, they are at risk for the most common heart disease, HCM (hypertrophic ). This is a genetic disease that can result in heart failure and death, so it is of paramount importance that breeders diligently screen for this via echocardiogram performed by a Veterinary Cardiologist. Because HCM doesn’t always show up in the first years of life, it is important for pet owners to proactively screen for this disease as well. It is also important to schedule annual with a veterinarian as untreated dental problems can lead to other health issues if gone untreated.

The British Shorthair originated with cats imported from Egypt by when they invaded Great Britain. The breed helped protect Romans food supplies from rodents. One of the first breeds, they have changed little over the centuries. As the breed developed, crosses were made with the Persian between 1914 and 1918 introducing the longhair gene. Cats with short coats were part of the British Shorthair and cats with went into the Persian breeding programs.

Food shortages during World War II reduced the breeding stock and British Shorthair lines were all but lost. Breeders revived the breed by crossing with domestic shorthairs, Russian Blues, and Persians among others. The British Shorthair has grown in popularity since then and gained championship status in TICA in June 1979. While longhair kittens sometimes appeared in litters, they languished in obscurity as a breed. Today, the imposing British Longhair is a fitting companion breed to the British Shorthair resembling the Persians and Angoras of the early 1900s, obtaining championship status in TICA effective May 2009.

Breeds opposite in temperament are the Siamese/Oriental Shorthair, Abyssinian and Bengal

One of the oldest breeds, a descendent from the cats of ancient Rome. The British Shorthair bears the proud distinction of being one of the world’s oldest cat breeds. Experts think that the breed is a descendent from cats imported to Rome from ancient Egypt. It is believed that when the Romans invaded Great Britain in 43 CE, they brought the cats with them.

Blue is the most popular color for British Shorthairs.

A British Shorthair once had the world’s loudest purr. In 2011 Smokey, a 12-year-old British Shorthair, was given the title of loudest purr by the Guinness World Records. His vocal rumblings measured 67.7 decibels, and were reportedly as noisy as a lawn mower. He held the title for four years until another cat broke his record with a 67.8 decibel purr.

The British is an imposing breed. Their large, round face should have a sweet open expression, with a smug rounded muzzle. Chubby cheeks and no neck, blend into a stocky, semi-cobby, muscular, wide and firm body. Their coat is dense and rich, plush and thick in both shorthair and longhair varieties. Slightly reserved in temperament, they are a four feet on the floor breed, and like to be handled with gentle firmness and supported when carried.