American Curl at a Glance 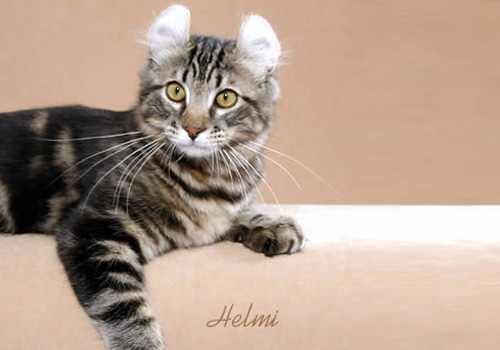 Best known for its distinctively shaped ears, the American Curl is an eye-catching cat with a sweet disposition that thrives on human interaction. They are lovable and physically affectionate cats that easily adapt to any situation. Find out more about this breed and if an American Curl is right for you and your family.

About the American Curl

Lovable and curious, American Curls love spending time with their families and participating in their every move, like unpacking groceries or watching TV. They love attention and being talked to, but are not noisy cats. They make a quiet “cooing” sound when they talk to their families and quietly nudge them for attention.

They love to greet their families with a soft bump to the head and show affection by patting and nuzzling against its owner’s face. Naturally clever and inquisitive, the Curl often spends a considerable amount of time exploring its environment or playing games.

Curls are playful and known as the “Peter Pan” of the cat world because they retain their kitten-like playfulness into their later years.

They enjoy daily exercise and can entertain themselves with just about anything left on the floor. Cat trees and indoor perches are recommended for climbing and jumping. They love to play and can even learn to fetch, but when they are ready for a break they will happily settle onto the nearest lap.

Curls are family-oriented, adapt easily and enjoy the company of other cats or cat-friendly dogs. 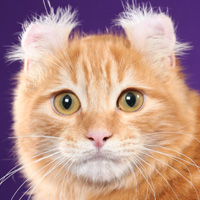 American Curls can be either longhair or shorthair. Shorthair Curls should be brushed regularly with a grooming glove or soft brush. Longhaired Curls do not have much undercoat, but should be brushed occasionally. Less undercoat means less shedding and less maintenance.

Nails should be trimmed periodically with a clipper (it is not recommended to use the scissor clippers). Curls are known to have a black ear wax that is normal for the breed therefor the inside of their ears should be clean periodically. Brush their teeth with a vet-approved pet toothpaste for good overall health and fresh breath and schedule regular veterinary dental cleanings.

Curls are slender cats. It is suggested to feed them a good quality food without a lot of fillers (like generic store brand foods). They will do just fine with good dry food, although they love canned foods as a supplement. Curls love treats, but they are not necessary for their health. A few in moderation will make them your BFF.

As with all cats, it is important to give your cat fresh, clean water daily. Fresh, clean water is best, so cats don’t hesitate to drink. If you worry about your cat drinking enough water each day, here's a tip from some cat behaviorists - place the water bowl at least three feet away from any food. Cats’ noses are sensitive and an overwhelming smell of food may cause them to drink less. Filtered drinking fountains can also be used in place of a water bowl.

Curls have no known genetic health issues because of the wide gene pools from their domestic outcross background.

The American Curl story begins in 1981 in Lakewood, California when Joe and Grace Ruga found a stray black kitten with a long-haired silky coat and unusual ears on their doorstep. The affectionate kitten quickly endeared herself to the Ruga's and was named Shulamith. All American Curls trace back to her.

Later that year, Shulamith had her first litter of kittens. Of the four, two had the same curly ears as their mother. The Ruga’s entrusted one of these kittens to another individual to work with them to explore this trait, in what they referred to as their “Test breeding program”. With each new litter, others joined the Rugas’ in this nucleus group of brand new cat fanciers focused on discovering more about these curly ears.

When introduced to the cat fancy the American Curl received almost instant worldwide attention as a spontaneous genetic mutation with no negative side effects. The Ruga’s flew to Texas with several curled eared cats to meet with Dr. Solveig Pflueger (known for her scientific research), a Chair of the TICA Genetics Committee and author of the Registration Rules in TICA; providing her with all the data compiled from the multiple generations that had been produced to that date. Dr. Pflueger initiated the first genetic study of the American Curl ears and provided guidance in the selective breeding program to conserve the gene and the structural style for the American Curl breed development.

Roy Robinson, the renowned English feline geneticist, worked with breeders and analyzed the data on 383 kittens from 81 litters. He confirmed that ear-curling gene was unique and that it was an autosomal dominant gene - meaning any cat with even one copy of the gene will show the trait. In an article published in the December 1989 issue of the Journal of Heredity, he reported that he had found no defects in any of the crosses that he had analyzed and this laid the foundation for a new and healthy breed.

In an unusually rapid rise from stray to star, the American Curl was recognized by TICA in 1987 — just five years after the first breeding programs began.

The Turkish Angora and Havana Brown are the most similar to the American Curl semi-foreign body structure.

Curl kittens are born with straight ears. Within 2-3 days, the ears on the kittens curl up into a tight “rosebud”. At about 6 weeks of age, the kittens enter a developmental phase called ‘transition’ when their ears will begin to unfold and obtain their final curvature around 4 months of age.

Dubbed the Peter Pan of the cat world due to their forever young, kitten-like personality that lives on well into adulthood — much like the fictional boy who never grew up.

American Curls have a tendency to open doors (including turning doorknobs) and cabinets.

The American Curl is the result of a spontaneous ear mutation in the domestic cat population of the United States. The first such cat was found n Southern California in 1981 and named "Shulamith". The distinctive feature of the American Curl breed is their unique, attractive curled ears. American Curls are a well-balanced, moderately-muscled, medium-built cat. They are alert and active with gentle, even dispositions.

Click here to find an introduction to the breed.