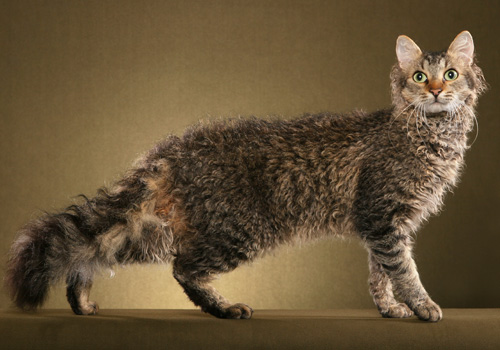 LaPerms are known for their soft, curly, low-maintenance coats. They are extremely affectionate and are known to sit on the laps of their families to seek out kisses or look deeply into their eyes. They are not generally vocal, but seem to understand human moods and react accordingly.

Easygoing and playful, the strong-bond they create with their families make them great companions for children, the disabled and those who live alone. They love companionship and should not be left alone often without a companion such as a cat with a similar activity level or a cat-friendly dog.

Activity Level:
The LaPerm is not a couch potato! They are an alert, intelligent, and active cat with a high degree of curiosity and independence. They love to be involved in everything their families are doing and can often be found following their people around the house and tapping their legs as they pass by to get their attention.

Toy mice and ping pong balls are recommended as well as a tall cat tree so they can climb and be up high to supervise the area.

LaPerms remain active and playful throughout their life, but will never miss an opportunity to cuddle up on their owners lap or around their neck. 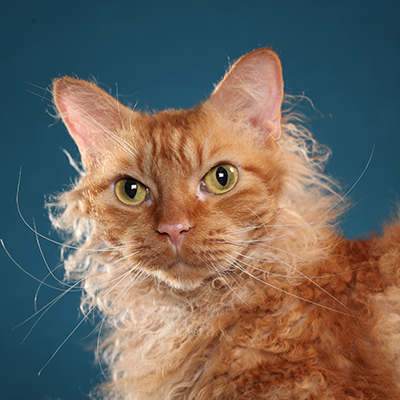 Their coats are light, low shedding, and rarely matt since they are without a heavy undercoat. A wide toothed comb can be used to brush them, however bathing and brushing is not necessary as they are meant to look a little untidy.

Kittens are born with short fur and do not look like mini-adults. Longhairs in particular may go through some changes before getting gradually longer and curlier, with their full coat not coming in until three-years-old.

In summer, their coats are lighter with some loss of undercoat and on the neck for coolness. In winter a mature LH LaPerm will have a full ruff and plumed tail. Shorthairs are not as impacted seasonally and have a springy feel to their coat and a bottle brush tail.

Nutrition:
All cats need a quality food to keep their systems healthy and immunity high. The TICA LaPerm Breed Committee recommends asking your breeder what they are currently feeding and continue with that regime to avoid stomach upsets. While metabolism slows after neutering, it is rare for a LaPerm to overeat as they have so many other interests.

Fresh water should be available at all times. Water bowls should be washed and refilled with fresh water daily. As with all cats, it is important to give your cat fresh, clean water daily so they don’t hesitate to drink. If you worry about your cat drinking enough water each day, here's a tip from some cat behaviorists: place the water bowl at least three feet away from any food. Cats’ noses are sensitive and an overwhelming smell of food may cause them to drink less. Filtered drinking fountains can also be used in place of a water bowl.

Health
As a relatively new breed, there are no breed-specific diseases associated with the LaPerm. The TICA LaPerm Breed Committee recommends all breeders conduct DNA tests on all allowed domestic outcrosses before being introduced into the breed pool.

On March 1st, 1982 Linda Koehl watched a brown tabby cat named Speedy have a litter of six kittens in a barn in her cherry orchard and witnessed the birth of a new “Rex” breed mutation: a long, skinny, hairless kitten with large wide-spaced ears, and a tabby pattern apparent in the skin like a tattoo. At six weeks, the kitten developed a sparse curly shorthaired coat with a brown classic tabby pattern and was named Curly. As she matured, Curly developed a soft wavy coat. Over time, more curly-coated cats appeared and fascinated visitors to the farm who told Linda she had something special. She entered six cats in a cat show to see what people thought. She started a breeding program and established her unique cats as the LaPerm breed.

LaPerms were accepted by TICA for championship competition in 2003.

The LaPerm is a naturally occurring mutation producing both long and shorthaired cats. It is medium-sized and curly-coated, with a semi-foreign type body. All colors are acceptable. All parts of the body are in harmony with the size of the cat. There is evidence of surprising weight for size. The cat is alert and seems to be walking high on his legs. Coat texture will be distinctly different than that of any other Rex mutation and will vary within the breed. Whiskers will be very long and curly, ear furnishings and eyebrow hairs may also curl and may grow long enough to curl into eye. The perfect cat will have a moderately soft, but textured coat that will be loose and bouncy, standing away from the body, resembling a "Gypsy Shag". A coat you can run your fingers through to the skin but will appear very curly. The cat will have ringlet type curls at the base of the ears and on the underside of the neck running into the ruff on the longhaired version. The coat should be free of matting, so it should not be too thick and heavy. 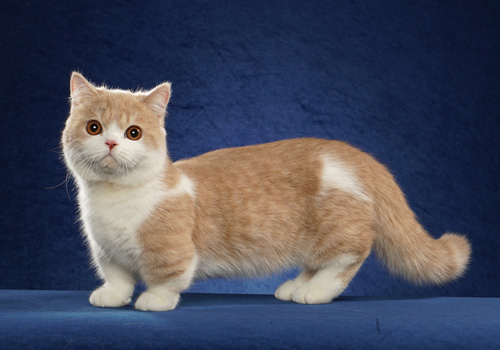 Accepted For Championship in TICA in 2016 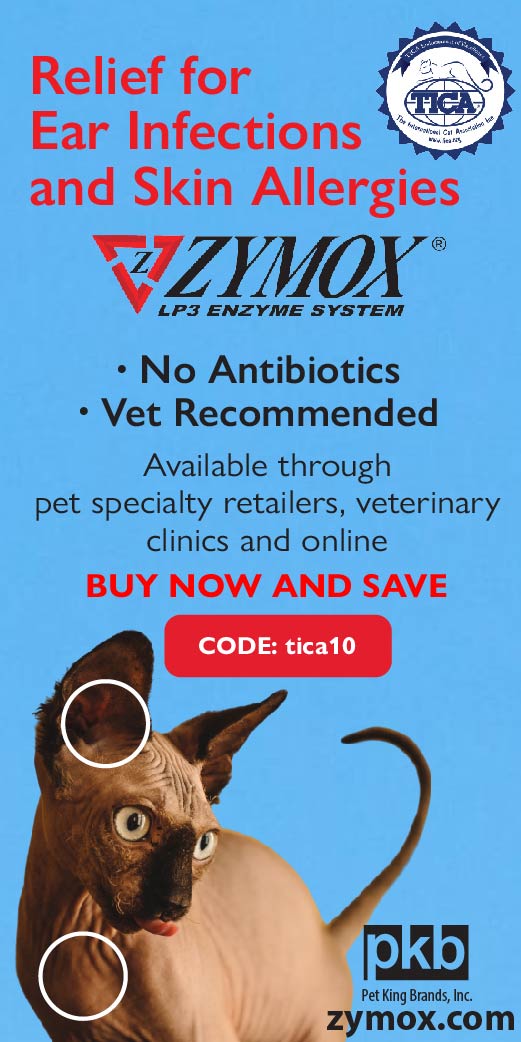