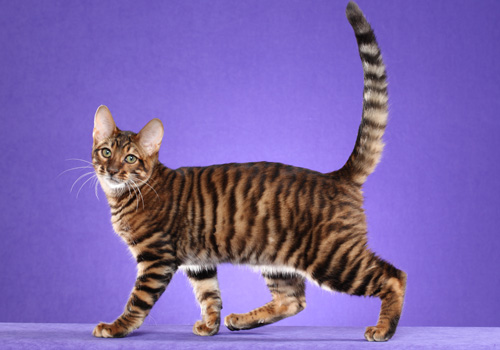 Known for their striking tiger-like appearance, the Toyger is a friendly, outgoing cat that delights in being with people. They are highly intelligent and get along with other pets. With their looks and athleticism, they offer a sense of having truly tamed the wild. Grooming the Toyger is simple, and much safer than grooming a tiger. Note that this is an all domestic cat – there is no tiger blood in the Toyger. Find out more about this breed and if the Toyger is right for you and your family.

Toyger is a rare breed that combines the look of a tiger with the easygoing nature of a domestic cat. The Toyger has a sweet, calm personality and generally gets along with everyone. Their laid-back but interested personalities make them easy to live with beloved members of their households.

Activity Level:
Toygers are highly intelligent and easy to train to walk on a leash, play fetch, or run an agility course. They are active enough to entertain children and adults alike, but not so energetic that he’ll run you ragged. Challenge their brain with interaction, tricks, and puzzle toys that reward with treats. Exercise for active cats is highly desirable and most Toygers teach themselves to run on a cat exercise wheel. If not a wheel, then plenty of toys or children can exercise them.

One of the most important aspects of caring for a Toyger is a desire on the part of family members to interact with this willing companion animal in a consistent, dependable, and caring manner. As with many cats, if ignored the Toyger will by necessity become independent and aloof. With attention, eye contact, and a bit of empathy, a Toyger can be the best of companions.

These quiet-tempered felines are a good fit for most households and families. 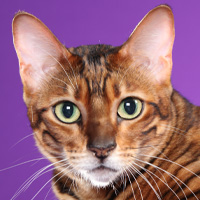 Grooming
Grooming the Toyger is relatively simple, and much safer than grooming a tiger. Brush or comb them occasionally for most of the year, and once a day during their short shedding seasons to keep fur on the brush rather than the furniture.

Toyger’s do not have any particular nutritional needs other than making fresh water always available and a good, quality diet of both wet food and dry kibble.

Cats often drink less water than current thought suggests, so provide a fresh, clean source of water daily so cats don’t hesitate to drink. If they are fed predominately dry kibble or if you worry about your cat drinking enough water each day, here's a tip from cat behaviorists - Place the water bowl at least three feet away from any food. Cats’ noses are sensitive and an overwhelming smell of food may cause them to drink less. Filtered drinking fountains can also be used in place of a water bowl.

The Toyger is considered an overall healthy breed, but heart murmurs, possibly indicative of hypertrophic cardiomyopathy, and cow hocking have occurred in the breed.

As with any companion animal, watch for any signs of behavior not usual for a specific cat -- like not eating, drinking, playing, etc. -- that would suggest a visit to the vet. Remember that cats often show no signs of distress until a condition is well advanced. Be aware of changes.

People often refer to mackerel tabby cats as tigers or tiger stripes and yet their pattern is a far cry from the bold braided patterns of the real tiger. In the late 1980s, Judy Sugden was working with the high contrast brought to the cat fancy by the Bengal cat to improve the clarity of the mackerel markings in these tiger cats. She noticed that her cat Millwood Sharp Shooter had two spots of tabby markings on the temple (unusual marking in the domestic tabby) and realized that this could be a key to developing a cat with the true circular pattern on the tiger’s head. Her project of a tiger-looking domestic with a carefully shaped nature of human companionship was born. Two cats that formed the cornerstone for the young Toyger breed were a striped domestic shorthair named Scrapmetal and a big-boned Bengal named Millwood Rumpled Spotskin. In 1993, Judy also imported Jammu Blu, a street cat from Kashmir, India, who had all spots between his ears rather than the regular tabby lines.

Judy embarked on her program to develop these toy tigers with a firm picture in her mind of the characteristics that would be needed to suggest toy tiger to the public: a muscular, long body to display the bold vertical patterns; a stretching and branching of the tabby patterns; the circular head markings found in no other domestic cat; vivid glittering colors; and a long faced, small eyed head suggestive of the big cats… and most importantly, a laid-back temperament to make the Toyger a delight to live with as a companion. Joining Judy early on in this pioneering work were Anthony Hutcherson (JungleTrax) and Alice McKee (Windridge).

In 1993, TICA accepted the Toyger for Registration and in 2000 advanced them to the new breed exhibition classes, finally granting them full recognition as a championship cat in February 2007.

The Toyger is a designer cat: a loving, glittered, medium sized domestic shorthair companion cat reminiscent of the big cats in pattern, type, confidence and movement. Designed with the experience of active cat ownership in the modern urban setting foremost in mind, this cat must be a uniquely beautiful and engaging companion, willing and able to thrive in a human centered life. Thus, companionability traits, such as, but not limited to, dependable, quiet temperament; laid-back personality, intelligent and easily trained and handled; good athletic ability; stately movement; excellent health and longevity are all important and desirable and must be considered an integral part of the breed profile, breeding program and genetic makeup of the Toyger.