Turkish Van at a Glance

Turkish Van at a Glance 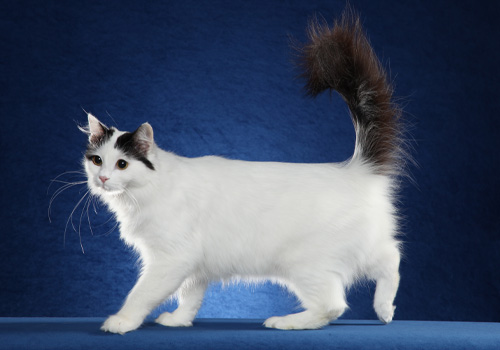 Known as ‘the swimming cat’, the Turkish Van is an ancient breed thought to have originated in eastern Turkey. The breed doesn’t reach full maturity until they are three to five years of age. These active, robust cats enjoy swimming and water games. In addition to being loyal and loving, they are highly intelligent with a mischievous streak. They get along with other pets, including dogs, after making sure the other pets know they are the one in charge. The Turkish Van’s coat does not shed much and is easy to groom with weekly combing. Find out more about this breed and if the Turkish Van is right for you and your family.

About the Turkish Van Breed

The Turkish Van is considered a mischievous and cleaver clown-like cat that is entertaining to live with, despite being a handful. Loving and affectionate, they like to follow their favorite person around the house and enjoy being petted but aren’t necessarily fond of being held or cuddled. Most cats flick their tails when they are angry or upset, but the Van’s tail seems to be in constant motion, even when they are in a good mood, which is most of the time.

Activity Level:
Active and energetic, the Van likes to jump and climb to the highest point in the room. They can often be found running, playing in water, and retrieving their toys. They like to play with water and have been known to turn on the water faucet. Highly acrobatic, Vans have been known to catch toys mid-air and roll in somersaults. When not following their family around, they are highly intelligent and good problem-solvers. Challenge their brain and by teaching them tricks and providing puzzle toys that reward with treats. Other favorite toys are big peacock feathers, furlike toys on a string, and small balls that they can chase and fetch. The Van is tough on toys so be prepared to replace them on a regular basis.

The Van is very social and gets along well with families with children and other pets. They require a lot of attention from their families and don’t like to be left alone for long periods of time. 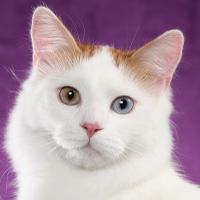 Grooming
The Turkish Van may look high maintenance, but their single coat is easy to care by combing just once a week. They will need coat care more frequently in winter when their coat is heavier. Regular baths are not necessary.

Turkish Van’s do not have any particular nutritional needs other than good, quality, wet or dry food.

The Turkish Van breed is considered an overall healthy breed. All cats have the potential to develop genetic health problems, just as all people are capable of inheriting diseases. It is recommended that their vaccinations and parasite treatments are kept up to date.

This ancient breed has existed in the isolated mountainous area of the Eastern Anatolian region since the Middle Ages and the isolation is thought to have helped preserve its unique features until it was discovered by the West in the mid-1950s. At that time, Laura Lushington and Sonia Halliday were touring Turkey in 1955 photographing people and places of interest to tourists. While there, they encountered some longhaired white cats with auburn (red) markings on the head and tail. They were given two unrelated kittens-a male and a female-who traveled with them. When they stopped near a stream or pond to cool down from the heat, they were amazed to see the kittens paddling around in the water.

On their return to England, they took the two kittens with them and began to promote them as a unique breed. The rarity of the cats in their native homeland means there are few cats available for export but breeders around the world have worked together to preserve the magnificent cats.

TICA granted them championship status to the Turkish Van in June 1979.

The Turkish Van is a natural breed cat that originated in the rugged and climatically varied region of Lake Van, Turkey. In the Van Region, Turkish Van Cats are traditionally a solid white cat or a white cat that has colored markings of a distinctive pattern known as Van Pattern. Van Pattern restricts color on a white cat to the head and tail. The Vans are solidly built semi longhaired cat with no undercoat and display seasonal variations in coat appearance. The strength and power of these cats is evidenced in a substantial body and legs, well-developed chest, and muscularity. These cats take a full 3 to 5 years to reach full maturity and development; therefore, allowances must be made for age and sex. Despite age and sex, as adults, individuals should convey an overall impression of a well-balanced and well-proportioned appearance in which no feature is exaggerated to foster weakness or extremes. These cats should appear alert healthy, and be well-groomed. Males should be large and imposing, females medium to large and well-balanced. These cats should not be restrained too tightly, but should be handled with a firm and gentle pressure. As they are very intelligent and alert cats, they feel more secure and perform best when allowed to stand on their own on the table (if temperament allows).