The Japanese Bobtail is the good luck cat of Japan. When visiting Japan, one sees a ceramic cat with a raised paw beckoning in many doorways and it is the traditional symbol of good luck. The Japanese Bobtail is a natural breed originating in Japan with a chiseled head structure and stylized angular lines. It is an ancient breed that is portrayed in manuscripts and paintings for at least 1,000 years. Like the bright colors of the beckoning cat, it comes in many colors but the favored ones are rich, vibrant, and bright. The favorite color is the mi-ke or tri-colored cat. Vividly contrasting colors and bold dramatic patterns are preferred on all bi-colors. The unique feature of the cat is its bobbed tail that consists of a variety of kinks and curves creating a pom-pom effect-like a fingerprint, no two tails are ever the same. If you're looking for an active athletic cat with elegant flowing lines, these porcelain-like cats may be just what you're looking for! Enjoy their rambunctious antics while admiring their structure all dressed in rich deep colors and bold patterns.

In 1968 the Japanese Bobtail arrived in North America when breeder Judy Crawford sent the first cats to Elizabeth Freret in the USA. When Judy returned to the USA, she brought more of the cats with her and worked with Elizabeth Freret to get the delightful breed recognized. TICA initially recognized the shorthaired Japanese Bobtail for competition in June 1979. Even though the longhaired cats had also existed for centuries, TICA only recognized them for competition in March 1991.

These charming cats are very active and intelligent. They enjoy companionship and have loving, outgoing personalities and love to talk to you with a large vocabulary of soft chirps and meows. The Japanese Bobtail loves to play whether it is splashing in water, engaging in a game of fetch, or pouncing and dancing with a beloved toy. When not busy playing, these busy cats are off exploring every nook and cranny, whether it is investigating the contents of a cupboard or leaping to the top of the bookcase to get a better view of what is happening outside. These active cats are not lap cats-while they will settle for a short nap, they are too busy to stay still for long and are quickly off to the next adventure. They are loyal to their family and adapt well to other pets and children making them an excellent addition to any family.

The Japanese Bobtail is named for its distinguishing trait-the unique pom-pom tail composed of curves, angles and kinks. No two tails are ever the same and may be flexible or rigid but must be carried close to the body and be in balance with the body. The hair on the tail is longer than that of the body resulting in the pom-pom appearance. In the longhairs, the pom-pom looks like one of the full-flowered chrysanthemums seen on the streets of Japan. The bones in the tail are often fused or may be jointed in one or two places so they can wiggle them expressively but they should only be handled very gently.

But the tail is not the only distinguishing characteristic. They have high chiseled cheekbones and large eyes set on a pronounced slant in the triangular head that is topped with large, high-set ears that accentuate their alertness and inquisitive nature. They are medium sized cats with parallel lines in the long slender body and powerful hind legs made for jumping. The deep Z shape of the hind quarters gives immense power to the leap allowing the Japanese Bobtail to spring to great heights with ease. They are extremely muscular cats with graceful flowing movements. Females weigh 5-7 pounds while males weigh 8-10 pounds.

The Bobtail comes in both long and short coat lengths and wide variety of colors and patterns. The traditional color is the tri-colored mi-ke (mee-kay) that combines rich red, deep black and pristine white in a package that is considered good luck. They can have any color eyes but those with two different eye colors (odd-eyed) or with blue eyes are especially prized and are found most often in cats with a lot of white.

The Japanese Bobtail coat is soft and silky as you stroke it with very little undercoat. Shorthairs have a medium length coat covering the powerful muscular body. Their coat lies flat against the body emphasizing the elegant stylized lines of the cat revealing a structure similar to a porcelain statue. The longhairs have a longer coat draping the body with a belly shag and definite britches on the hindquarters underneath the chrysanthemum-like tail. The lack of undercoat in both hair lengths mean there is little shedding other than at seasonal coat changes. The silky texture means the longhair is also less likely to mat or tangle. A regular light combing or brushing will keep your Japanese Bobtail's coat in top condition and the cats enjoy the extra attention. 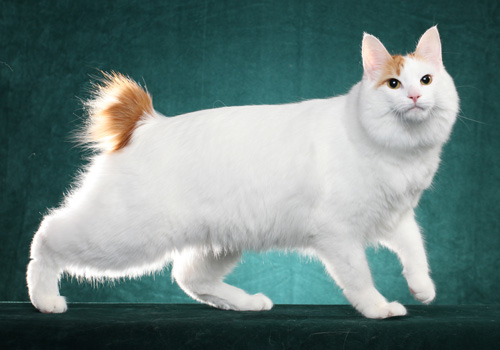 Accepted For Championship in TICA in 1991