Maine Coon Polydactyls at a Glance 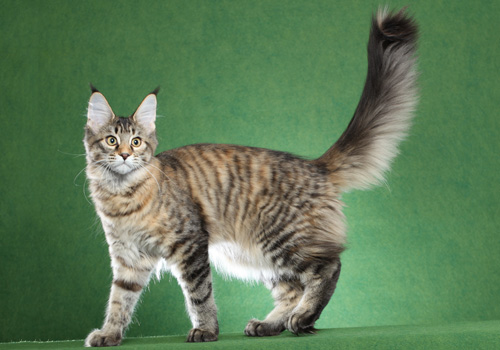 Despite their size, the Maine Coon cat is sweet-tempered, gentle and friendly and gets along with just about everyone. They have a clown-like personality and are willing to ‘help’ their owners, yet aren’t demanding of attention. Find out more about this breed and if the Maine Coon is right for you and your family.

America's native longhair, Maine Coons were well established over a century ago as a hardy, handsome breed of domestic cat, well equipped to survive the hostile New England winters. Breeders have sought to preserve the Maine Coon's "natural," rugged qualities. Maine Coon owners enjoy the breed's characteristic clown-like personality, affectionate nature, amusing habits and tricks and willingness to 'help' with any activity. They make excellent companions for large, active families that also enjoy having dogs and other animals. For owners wishing to show, the Maine Coon has reclaimed its original glory in the show ring.

One of the oldest natural breeds in North America, the Maine Coon is generally regarded as a native of the state of Maine (in fact, the Maine Coon is the official Maine State Cat). A number of attractive legends surround its origin. A wide-spread (though biologically impossible) belief is that it originated from matings between semi-wild, domestic cats and raccoons. This myth, bolstered by the bushy tail and the most common coloring (a raccoon-like brown tabby) led to the adoption of the name 'Maine Coon. Another popular theory is that the Maine sprang from the six pet cats which Marie Antoinette sent to Wiscasset, Maine when she was planning to escape from France during the French Revolution. Most breeders today believe that the breed originated in matings between pre-existing shorthaired domestic cats and overseas longhairs (perhaps Angora types introduced by New England seamen, or longhairs brought to America by the Vikings).

First recorded in cat literature in 1861 with a mention of a black and white cat named 'Captain Jenks of the Horse Marines,' Maine Coons were popular competitors at early cat shows in Boston and New York. A brown tabby female named 'Cosie' won Best Cat at the 1895 Madison Square Garden Show.

While Maine Coons are highly people-oriented cats, they are not overly-dependent. They do not constantly pester you for attention, but prefer to "hang out" with their owners, investigating whatever activity you're involved in and "helping" when they can. Most are not lap cats but Maine Coons will stay close by you, follow you from room to room and wait outside a closed door for you to emerge. A Maine Coon will be your companion, your buddy, your pal, but rarely your baby.

Maine Coons are relaxed and easy-going in just about everything they do. They generally get along well with kids and dogs, as well as other cats. They are not as vertically-oriented as some other breeds, preferring to chase objects on the ground. Many Maine Coons will play "fetch" with their owners. Maine Coons develop slowly, and don't achieve their full size until they are three to five years old. Their dispositions remain kittenish throughout their lives; they are big, gentle, good-natured goofs. Maine Coons rarely meow, instead most have a soft chirp or trill in a tiny voice doesn't fit their size!

The important features of the Maine Coon are the head and body shape, and the texture and 'shag' of the coat. Maine Coons evolved by adapting to a harsh Northeast climate. Its semi-longhair glossy coat is heavy and water-resistant, longer on the ruff, stomach and britches and shorter on the back and neck. The coat falls smoothly, and is almost maintenance-free: a weekly combing is all that is usually required to keep it in top condition. Maine Coons have very long, bushy tails.

One of their most distinctive features is their eyes, which are large, oval to nearly round, expressive, and set at a slightly oblique angle.

Maine Coons are seen in nearly all traditional colors and patterns. The most common color and pattern is the brown classic or mackerel tabby but Maine Coons are also seen in solid pattern (white, black, blue and red), tortoiseshell pattern (black, blue), tabby pattern (classic or mackerel - brown, blue, red, cream), silver pattern (black-silver, blue-silver, red-silver, cream-silver). All colors (save white) and all patterns may have white markings (known as particolor). Eye color ranges from gold to green. Blue and odd-eyes are permissible in whites and/or particolors.