Originating in the Northwestern United States, the loyal Pixiebob is muscular, brawny cat bred to resemble the wild Coastal Red Bobcat found in the coastal mountains of the area. It is the only breed that accepts polydactyls (cats with extra toes) and comes in two coat lengths. These intelligent cats replicate the look of the wild bobcat but have the loving personality of the domestic cat. Often called dogs in disguise, the affectionate Pixiebob is devoted to its family and can be taught to walk on a leash to participate in family outings. These sturdy cats have the presence and stature of the bobcat with the personality of the domestic cat.

Carol Ann Brewer (Stoneisland) purchased a polydactyl spotted male kitten with a short tail in the spring of 1985 from a couple in the foothills of the Cascade Range in Washington State. In January 1986, she rescued a classic patterned male with a short tail who stood as tall as her knees and named him Keba. He bred a neighbor's domestic female named Maggie who delivers a litter in April 1986. Carol Ann took one of the female kittens with muted spotting on a reddish-fawn coat and a wild look, naming her Pixie. By 1987, Carol Ann realized that these bobtailed cats had a distinctive appearance and began looking for more cats with this look. She was also concerned about what would happen if she lost Pixie and decided to create more cats that looked like her. In 1989 she documented a standard that represented the traits that were consistently being reproduced and named the fledgling breed Pixiebob in memory of her original cats.

In 1993, Carol Ann approached TICA to begin the recognition for these unique cats and in 1994 TICA accepted the Pixiebob for Exhibition Status and in 1995 advanced it to NBC effective May 1, 1996. In 1997 the new breed was granted championship status beginning with the 1998 show season. IW SGC Silversprings Zeus was the first Pixiebob to attain an International Award.

The active, social Pixiebob is doglike in its loyal devotion to its family and makes a great companion for children while embracing the company of other pets. They bond strongly with their families and easily learn to fetch and to walk on a harness and leash. While the Pixiebob is an active cat wanting to take part in all your activities, it is also a very laid-back relaxed cat participating calmly in the family. They are an inquisitive, companionable cat that wants to be with you and to communicate with you in their own language of chirps, chitters and the occasional growl.

Pixiebobs come in longhair and shorthair versions. They have a thick double coat with a woolly texture that stands off from the body giving it a padded feel when petted. Longhairs have a medium coat up to 2 inches in length with a softer, silky texture. Like the wild bobcat they are bred to resemble, some Pixiebobs have lynx tips on their ears. Their facial hair grows downward giving them the appearance of a man's muttonchop sideburns. The ideal Pixiebob is a brown spotted tabby ranging in shade from tawny to a reddish brown. The spots are small and are muted by heavy ticking-the ticking is heavier in the winter months and may be more silvery in tone as well. Their eye color can be golden brown or gooseberry green.

These medium to large cats have substantial boning and muscular, rangy bodies that gives them a rolling gait like a wild cat. They have long heavy legs, with the hind legs slightly longer than the front, and big paws with long thick toes. Males weigh between 12 and 17 pounds while the slightly smaller females range from 8 to 12 pounds. Their faces are similar to the wild bobcat with the shape of an inverted pear, a thick fleshy chin and puffy nose leather. They also have a heavy brow over a medium-sized soft triangular eye.

The minimum tail length of a Pixiebob is 2 inches and can be as long as the hock however some cats will have tails shorter or longer than these proportions. The tail is frequently kinked or knotted but should be completely flexible and move naturally.

Cats normally have 5 toes on their front paws and 4 on the back. Polydactyl cats have more than that number of toes. They may have more on one foot than on the others and the extra toes tend to appear on the front feet before the back feet. The Pixiebob is the only breed allowed to have polydactyly and the maximum number of toes allowed is seven. 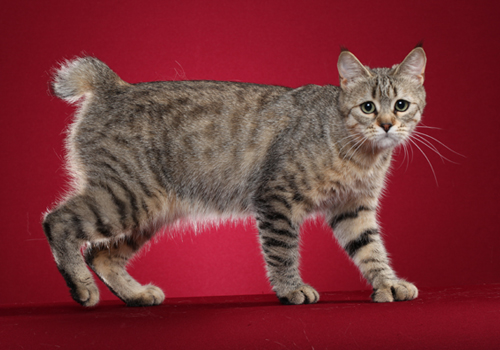 Accepted For Championship in TICA in 1998