Japanese Bobtail at a Glance

Japanese Bobtail at a Glance 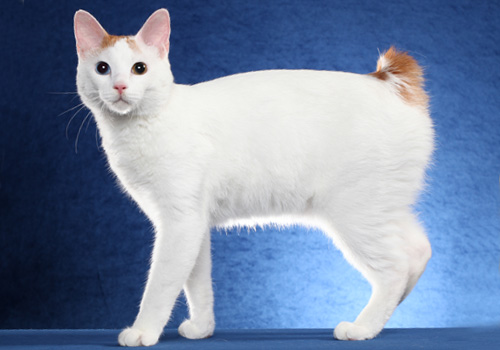 The good luck cat of Japan is named for its distinguishing trait, the unique pom-pom tail composed of curves, angles and kinks. No two tails are the same. These charming cats are active and intelligent. While they will settle on your lap for a short nap, they are too busy to stay still for long and are quickly off to the next adventure. They are loyal to their family and adapt well to other pets and children. They can also be found in two easy-to-maintain coat lengths. Find out more about this breed and if the Japanese Bobtail is right for you and your family.

About the Japanese Bobtail Breed

Japanese Bobtails are talkative, with voices described as almost songlike. They communicate with a wide range of chirps and meows. These charming cats are very active and intelligent. They enjoy companionship and have loving, outgoing personalities When not busy playing, these busy cats are off exploring every nook and cranny, whether it is investigating the contents of a cupboard or leaping to the top of the bookcase to get a better view of what is happening outside.

Activity Level:
The hind legs of the Japanese Bobtail are noticeably longer than their forelegs. Thanks to this feature, they are known to be great jumpers and excel at feline agility. An active breed, they like to splash their paws in water and play fetch. Japanese Bobtails are highly curious and love to explore. Challenge them by teaching them tricks and providing them with puzzle toys that reward them with treats.

Japanese Bobtails are loyal cats who get along well with children and other pets, including dogs. However, they are very active cats and should not be considered a lap cat. They love people and are often found perched on the shoulder of a family member. 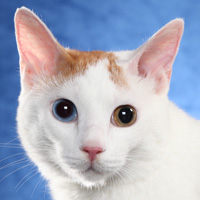 Grooming
The shorthaired Bobtail has a medium-length coat that is soft and silky, without a noticeable undercoat. The longhaired variety has a medium-length to long coat with a soft, silky texture and a ruff on the chest. The coat typically is shorter at the shoulders, gradually lengthening toward the behind of the cat.

Their coat is easy to groom with twice-weekly brushing or combing. However, they tend to shed during the fall and spring and will need to be brushed more frequently during those seasons.

Japanese Bobtail cats do not have any particular nutritional needs other than good, quality, food. As with all cats, it is important to give your cat fresh, clean water daily. Fresh, clean water is best, so cats don’t hesitate to drink. If you worry about your cat drinking enough water each day, here's a tip from cat behaviorists - place the water bowl at least three feet away from any food. Cats’ noses are sensitive and an overwhelming smell of food may cause them to drink less. Filtered drinking fountains can also be used in place of a water bowl.

The Japanese Bobtail is considered an overall healthy breed. However, it is recommended their vaccinations and parasite treatments are kept to date.

In 1968 the Japanese Bobtail arrived in North America when breeder Judy Crawford sent the first cats to Elizabeth Freret in the USA. When Judy returned to the USA, she brought more of the cats with her and worked with Elizabeth Freret to get the delightful breed recognized.

The Japanese Bobtail should present the overall impression of a medium-sized cat with long clean lines and bone structure. It is well-muscled, but straight and slender rather than massive in build. The unique set of its eyes, combined with high cheekbones and a long parallel nose, lends a distinctive Japanese cast to the face, especially in profile, which is quite different from the other Oriental breeds