Siamese at a Glance 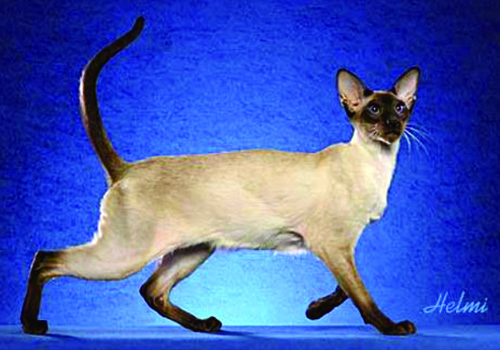 One of the oldest and most recognizable cat breeds, the Siamese cat is the parent breed for the Siamese Breed Group, which includes the Balinese (truly a longhaired Siamese) and the Oriental Shorthair and the Oriental Longhair. They share the same body type, but come with a different "paint job". Siamese are very social and people oriented and thrive in the company of other people. Find out more about this breed and if a Siamese is right for you and your family.

Nicknamed Meezer, the Siamese is just as famous for their voice as their looks. They will “talk” to you all day and night, expressing their opinion on everything and demanding attention.

The active and social Siamese loves people of all ages, including children, cat-friendly dogs and other cats. They thrive on attention and affection and are often found beside their humans. Siamese like to be “helpful” and follow family members around throughout the day. They love warm places and can be typically found sitting on their humans laps during the day and snuggling under the covers with family members at night.

Siamese are very social and do not like to be left alone for long periods. As a result, many families have a second Siamese or another pet to keep them company during the day. This breed is best for those who enjoy having someone to talk and interact with throughout the day.

Siamese cats are a highly intelligent, agile, and athletic breed that require stimulation or a lot of toys to keep them occupied. They are loyal and loving and will pout and pine if given little or no attention and therefore are best suited for families who enjoy spending time and interacting with them on a regular basis.

They are great jumpers and love heights, so perches and cat trees should be provided. When left alone, Siamese cats have been known to entertain themselves for hours by turning on faucets, opening cabinets, seeking out new hideaways and watching television. They have been known to walk on a leash and play fetch as well as any Retriever. Keep your Siamese entertained and out of trouble by providing puzzle toys that require them to think and move to release treats or use a clicker to teach them tricks, such as tossing a small ball to fetch or running an agility course. 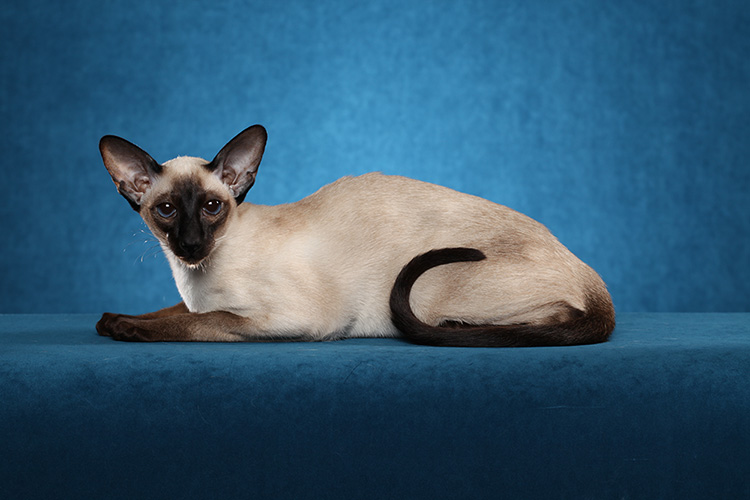 The short coat of the Siamese needs little care and is easy to groom. They tend to associate brushing with affection and enjoy being combed weekly with a stainless steel comb. You can also remove loose hair by dampening your hands with water and stroke down the cats body from head to tail.

Adult Siamese cats need to be fed at least twice a day. Kittens should be fed more often, at least three or four times per day, as they burn off calories more quickly. As with all cats, it is important to give your cat fresh, clean water daily. Fresh, clean water is best, so cats don’t hesitate to drink. If you worry about your cat drinking enough water each day, here's a tip from some cat behaviorists - Place the water bowl at least three feet away from any food. Cats’ noses are sensitive and an overwhelming smell of food may cause them to drink less. Filtered drinking fountains can also be used in place of a water bowl.

Canned foods are often the preferred method for feedings. Not only are they more convenient, they are higher protein and lower carbohydrates than dry food. Their high-water content increases the cat’s overall fluid intake, which keeps the kidneys and bladder healthy. Due to their easily-digested ingredients, canned foods produce less solid waste in the litterbox as well.

Siamese cats are generally a healthy breed. They have a tendency to be sensitive to anesthesia. It is important to make the veterinarian aware of this before any type of surgery. This includes routine surgeries such as neutering, spaying and dental cleanings.  Siamese can be susceptible to Amyloidosis. There is much research being done to find a test for this disease but, to date there is no test available to detect Amyloids.

The Siamese is the legendary temple cat of the King of Siam; however, the actual origins of the Siamese have been lost. However, it is fairly certain that it is Eastern in origin. Manuscripts from Ayudha, the ancient capital of Siam (now Thailand), record native cats. One manuscript dating from the 12th Century, Cat Book Poems, pictures a pale-coated cat with a black mask, tail, feet and ears. The Siamese made its debut in Europe in 1871 at the Crystal Palace Cat Show in London. In 1879 the first Siamese arrived in the United States as a gift to the wife of President Rutherford Hayes from the United States Consul in Bangkok.

On the founding of TICA in 1979, the Siamese was one of the original breeds in championship competition. TICA currently accepts all colors and patterns of the pointed category for show.

The Siamese breed has been used to create many other pedigreed breeds of cat, including the Havana, Oriental Shorthair, and Oriental Longhair, Ocicat and the Tonkinese.

Just about any longhaired cat breed, such as Persian, Maine Coon, and the Norwegian Forest Cat.

A Key Player in The Wizard of Oz. In the movie The Wizard of Oz, a Siamese Cat is the cause for Dorothy missing her balloon ride back to Kansas. As the balloon is just about to lift off with the Wizard, a girl in the crowd holding a Siamese cat distracts Toto, causing him to jump out of the basket and Dorothy to chase after him.

Bob Dylan mentioned a Siamese cat in his 1965 classic “Like a Rolling Stone”.

World’s Oldest Cat. A Siamese cat named Scooter holds the record as the world's oldest male cat, dying at the age of 30

Once Lived in the White House. The breed was first seen in Europe in 1871 at a cat show in London and later appeared in the United States in 1879 as a gift to the wife of President Hayes.

The ideal Siamese is a svelte, graceful, refined cat of medium size with long tapering lines. It is in excellent physical condition, very strong, lithe and muscular giving the sensation of solid weight without excess bulk. While the breed is considered "medium" in size, balance and proportion are to be considered of greater consequence. The cat should "fit together". If it is extreme in one part, all parts should be extreme to retain balance.

Additional information and an introduction to the Siamese breed can be found in the links below: