Nebelung at a Glance 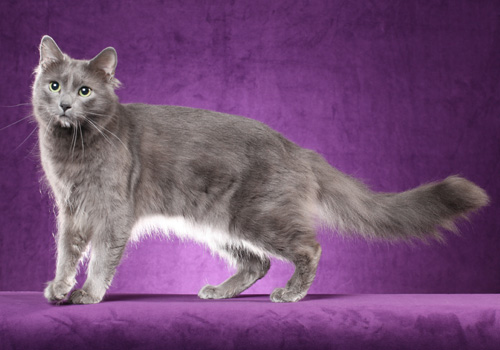 The highly intelligent Nebelungs are devoted to their families, but are often shy with strangers and young children. Kittens need time to adjust to their new home and should be allowed to advance at their own pace. As they settle in, their playful personality will emerge and they will soon be following family members from room to room. They are medium-sized cats that require regular combing to prevent tangles and mats. Find out more about this breed and if the Nebelung is right for you and your family.

The Nebelung is a new and relatively rare breed that are close relatives of the short-haired Russian Blue. They do not like change and do best in a quiet, stable environment. Known for being gentle and mild-mannered, they are playful and very affectionate with their immediate family members. Although they are loving and loyal with those they know, they can be reserved, and sometimes even aloof, with strangers. It is not unusual for them to hide when people are visiting the house.

Although they love receiving cuddles and affection from their family, they are not a particularly needy cat. They can be left home alone without incidence, making them well-suited to apartment living.

Despite their gentle, quiet, somewhat shy nature, Nebelungs love to play. They are especially fond of retrieving, jumping, and climbing to high places where they can study people and situations before making up their mind about whether they want to get involved.

Nebelungs love to be with their families, but are also capable of entertaining themselves during the day. They are active, affectionate, good-natured cats that prefer the company of their own family to that of visiting strangers.

Kittens need time to adjust to their new home and should be allowed to make their own advances to their new family. Once settled, the playful Nebelung will becoming a loving, cuddling companion that will follow his owners from room to room to remain in their company. 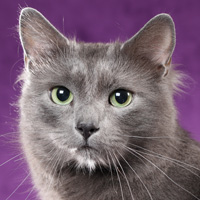 Grooming:
Comb your Nebelung’s coat regularly to ensure that it does not become matted or tangled. This will also remove dead hair and distribute skin oils.

Wipe the corners of the eyes with a soft, damp cloth to remove any discharge. Use a separate area of the cloth for each eye so you don’t run the risk of spreading any infection.

Check their ears weekly. If they look dirty, wipe them out with a cotton ball or soft damp cloth moistened with a 50-50 mixture of cider vinegar and warm water. Avoid using cotton swabs, which can damage the interior of the ear.

As with all cats, brush their teeth weekly to prevent periodontal disease and trim their nails every couple of weeks.

Nutrition:
Nebelung are sometimes known for being fussy about their food, but be careful, once they find something they like, they can easily become overweight.

Health
Nebelung’s are considered overall a healthy, but still relatively new breed. They are also known for their longevity, with it not being uncommon for them to reach eighteen years of age.

Cora Cobb (Nebelheim) developed the Nebelung breed and attained its recognition in TICA.

The first registered Nebelungs were Siegfried - born in 1984, and named for the murdered dragon slayer in the epic Germanic poem - and Brunhilde, born in 1985, and named for the Icelandic queen in the same poem. Siegfried's mother was a black domestic shorthair named Elsa belonging to Cora's son, Karl, and Siegfried's father was a longhair resembling a black Angora. Siegfried was the only blue longhair kitten-a beautiful, large kitten with long legs, long tail and a medium length coat.

Five months later a second litter was born with another longhaired blue but this time it was a female that Cora named Brunhilde. Her coat was longer and lighter than Siegfried's. These two cats were the foundation of the new breed. Siegfried and Bruhilde had their first litter in 1986 and shortly afterwards, in 1987, with the help of Dr. Solveig Pflueger, Cora applied to TICA for New Breed status (NBC).

The Russian Blue was designated as an outcross for the new breed and it continued to allow the addition of foundation cats as an important way of developing the gene pool. The new breed needed a unique standard and one was developed based on an interpretation of early 19th century cats imported to England. The late 1980s saw the beginnings of the cat fancy in Eastern Europe and a redevelopment of the Russian Blue created an influx of foundation cats to that breed. Some of these new foundation Russian Blues carried the longhair gene and provided a valuable new source of bloodlines to help develop the Nebelung breed.

TICA recognized the Nebelung for championship competition in 1997.

Nebelungs were featured on the Animal Planet show Cats 101.

The character Hairball in the movie Pound Puppies and the Legend of Big Paw was depicted by a Nebelung voiced by Frank Welker.

The name Nebelung is derived from the German word Nebel, meaning fog or mist, a reference to the cat’s flowing shimmering silvery-blue coat.

The goal of Nebelung breeding program is to produce a blue cat with the same type as those imported from Russia in the nineteenth and early twentieth centuries and to combine this type with a thick shimmering coat of medium length. The body and tail are long, the ears large in proportion to the head and the eyes range in color from yellowish green to green. Size is medium and the body well-muscled. The coat is medium long on the body, longer on the tail, with lighter colored guard hairs. The overall appearance is long, sturdy and well muscled.

Accepted For Championship in TICA in 1997