The natural, semi-longhaired Turkish Angora is the ballerina of the cat fancy. These graceful cats dance into your life with their fine-boned elegance and gossamer silk coat. Turkish Angoras not only come in traditional white but also in a wide array of colors. These energetic cats have a regal bearing but eagerly welcome visitors who come to pay tribute to them. The strikingly beautiful Turkish Angora has a long history in its native land and is considered a national treasure. Owners of these elegant, affectionate cats consider themselves fortunate to share their lives with this cherished gem of the cat world.

The Turkish Angora comes from Ankara (formerly Angora) where several other animals with delicate silky long coats originate. The earliest written reference occurs in 16th century France and they were well represented in the late 1800s and early 1900s at the dawn of the cat fancy in Europe. The Turkish Angora was used in Persian breeding programs in the early 1900s and disappeared as a separate breed. However, Turkey considered the cats a national treasure and established a breeding program at the Ankara Zoo to ensure the preservation of the breed. They concentrated on whites with blue eyes, gold eyes and odd eyes. They kept exact records of the genetically sound breeding program but were reluctant to let their cats go anywhere else. In the 1950's, American servicemen found the exquisite cats in the Ankara Zoo and carried news of them home. Eventually, in 1962, the Ankara Zoo allowed Colonel and Mrs. Walter Grant to have an odd-eyed white male named Yildiz and an amber-eyed white female named Yildizcek. These cats became the foundation of a new breeding program in the USA. 1964 saw Sergeant and Mrs. Ivan Leinbach bring a pair to Arizona: Sam Olgum and Aliya's Snowball. Mrs. Ray Porter brought a pregnant odd-eyed white female, Belkzar, home with her. The sire of the kittens was one of the Ankara Zoo males named Sam of Mountain Home. In 1966, the Grants were able to import another pair: an odd-eyed white male named Mav and an amber-eyed white female named Yaman. Other cats followed in the 1970s and the Turkish Angora became an established breed in North America.

The Turkish Angora has a semi-longhair, soft, silky coat that rarely mats. A comb through the coat once a week will remove any loose hair and keep the shining coat in peak condition. While white is the traditional color associated with the Turkish Angora, they come in a plethora of amazing colors. In the summer, the coat is shorter with britches and a fluffy tail. An adult Turkish Angora in full winter coat has medium length, fine, silky hair with a gorgeous mane, britches and a fully plumed tail.

They have a delicate appearance with their elegant modified wedge head shape, long fine-boned legs, and an elongated medium-sized body. Don't be mislead by their elegant appearance, Turkish Angoras are powerfully muscled cats, shrouded with a gossamer coat. They have walnut-shaped eyes set into the wedge and the head is crowned with large erect tufted ears. The tail streams out behind them in a long plume as they energetically bound through the house with fluid grace. 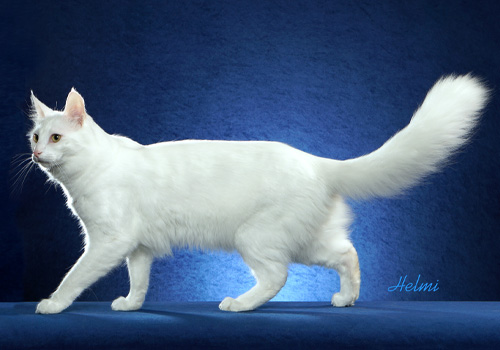