Oriental Longhair at a Glance 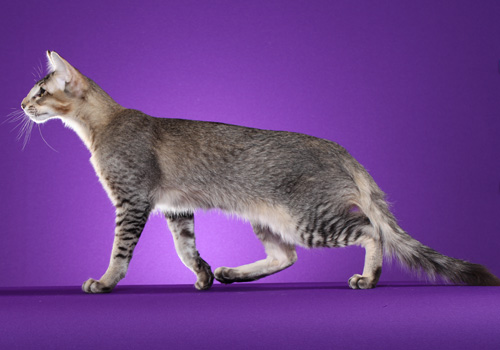 About the Oriental Longhair

Oriental Longhairs are very lively, elegant and colorful cats in every sense. They are wonderful for those interested in an interactive pet and devoted companion.

They have extremely loving temperaments and bond closely with their families and people of all ages, including children, cat-friendly dogs and other cats. They thrive on attention and affection and are often found beside their humans. They like to be “helpful” and follow family members around throughout the day.

Oriental Longhairs are talkative cats that enjoy talking with their family. They demand a lot of attention and tend to get into mischief if left alone for long periods of time.

Like the entire Siamese breed group, Oriental Longhairs are lively, intelligent, sociable cats who love to play. Many of them are fetchers, returning their favorite fetch toy tirelessly to the hands of their human while others amuse themselves for hours with an empty cardboard box. They do not grow out of their love of play, remaining kitten-like all their lives. No cupboard or high shelf is safe from these inquisitive, high jumping cats. Cat trees, teaser toys and games of fetch keep them on their toes. They excel at the feline sport Agility and are very receptive to training.

They hold their own against much larger cats and dogs, often ruling the roost. Oriental Longhairs are devoted to their people and need companionship. They love everyone at a party, happily jumping from lap to lap, purring and asking for pets. In general, an Oriental Longhair does not do well as an only cat. They are good with kids, other cats, dogs, and lots of activity and commotion.

Oriental Longhairs love attention and like to snuggle and sleep in a heap with their buddies. They are not cats for people who want to live a quiet life, have undisturbed knick-knacks, and a cat content to sit still and look pretty. 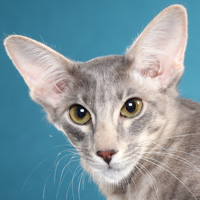 Grooming:
The silky coat of the Oriental Longhair rarely tangles or mats, does not shed much, and is easy to groom with weekly brushing.

Nutrition:
Adult Oriental Longhair cats need to be fed at least twice a day. Kittens should be fed more often, at least three or four times per day, as they burn off calories more quickly. Fresh, clean water is best, so cats don’t hesitate to drink. If you worry about your cat drinking enough water each day, here's a tip from some cat behaviorists - place the water bowl at least three feet away from any food. Cats’ noses are sensitive and an overwhelming smell of food may cause them to drink less. Filtered drinking fountains can also be used in place of a water bowl.

Canned foods are often the preferred method for feedings. Not only are they more convenient, but they are higher protein and lower carbohydrates than dry food. Canned food has a higher-water content so it increases the cat’s overall fluid intake, which keeps the kidneys and bladder healthy. Due to their easily-digested ingredients, canned foods produce less solid waste in the litterbox as well.

Oriental Longhair cats are generally a healthy breed. They have a tendency to be sensitive to anesthesia. It is important to make the veterinarian aware of this before any type of surgery. This includes routine surgeries such as neutering, spaying and dental cleanings.  Oriental Longhairs can be susceptible to Amyloidosis. There is much research being done to find a test for this disease but, to date, there is no test available to detect Amyloids.

Oriental Longhairs are a man-made breed that originated in the 1950’s in England. After World War II the number of breeders and breeding cats were reduced. Some of the remaining breeders became quite creative as they rebuilt their breeding programs. Many modern breeds developed from the crosses done at that time. One such breed is the Oriental Shorthair/Longhair. Russian Blue, British Shorthair, Abyssinian, and regular domestic cats were crossed to Siamese. The resulting cats were not pointed and were crossed back to Siamese. In a surprisingly few generations, there were cats that were indistinguishable from Siamese in all ways except color. As the Siamese pointed color is genetically recessive, pointed kittens were also produced. The best Siamese colored cats from these crosses went back into the Siamese breed, enlarging and strengthening the Siamese gene pool. The non-pointed cats were the ancestors of our modern Oriental Longhairs.

Initially, each color was developed and named as a separate breed: such as Foreign White, Havana (chocolate), and the Oriental Spotted Tabby. Soon it became apparent that there were too many possible colors to have a breed for each. All the non-pointed cats were grouped into one breed, the Oriental Shorthair/Longhair. Orientals were imported into the United States in the 1970s. New crosses between American Shorthairs and domestics to top show Siamese created additional colors. Interestingly, "Havanas" were imported into America early on but evolved into a distinct breed quite different from solid chocolate Orientals.

On the founding of TICA in 1979, the Oriental Longhair was one of the original breeds in championship competition. TICA currently accepts all colors and patterns of the traditional category for show.

The Siamese Breed Group has been used to create many other pedigreed breeds of cat, including the Havana, Ocicat and the Tonkinese.

Just about any longhaired cat breed, such as Persian, Maine Coon and the Norwegian Forest Cat.

Oriental cats are nicknamed “Ornamentals” because of their extensive color palette, having more colors and patterns than any other breed. See “Colors” above.

The ideal cat of this breed group is a svelte, graceful, refined cat of medium size with long tapering lines. It is in excellent physical condition, very strong, lithe and muscular giving the sensation of solid weight without excess bulk. While the breed is considered "medium" in size, balance and proportion are to be considered of greater consequence. The cat should "fit together". If it is extreme in one part, all parts should be extreme to retain balance.

Additional information and an introduction to the Oriental Longhair breed can be found in the links below: