The Himalayan is a gorgeous cat with the body and coat of a Persian but the color, pattern and stunning dark blue eyes of the Siamese. A man-made breed, it is named for the pointed pattern that is known as Himalayan in many other breeds. It is one of the most popular breeds and comes in a wide array of pointed colors.

The Himalayan is a poised, loving and sweet breed. It is a sedate and affectionate cat, that prefers to cuddle with you rather than climb up your curtains. The Himalayan is responsive to your moods and emotions. They are very intelligent. Some breeders say Himalayans tend to talk more, but nothing like the Siamese. They love to be petted but do not demand attention like some breeds. But if they are not getting enough attention they will let you know with their quiet meows and meaningful looks from their big blue eyes. They also love to play with toys whether it is the most expensive toy or a balled up scrap of paper.

The Himalayan is a medium to large cat with a short cobby body that is equally massive across the shoulders and rump. The head is large, round, and smoothed domed with great breadth of skull that is set on a short, thick neck. They must have perfect tooth occlusion and a strong, well developed chin. The boning should be heavy. The eyes are large, round and set far apart, giving the cat a sweet expression. The nose is short, snub and broad with a break centered between the eyes. The ears are small and rounded at the tip and set far apart and low on the head. Tail should be short and thick, but in proportion to the body. The Himalayan is solid, but not fat, with an overall appearance of soft roundness. The coat is long and flowing and requires constant grooming because of the undercoat that will mat if not groomed. This is a cat that demands a serious time commitment to keep the coat looking lovely and it takes knowledge and practice to do it properly.

The points consisting of the ears, legs, feet, tail and face mask should show the basic color of the cat. The body color should be uniform in color, but subtle shading and darker shaded areas on the coats of older cats is allowed, but there still must be a definite contrast between body color and point color. The Himalayan is accepted in TICA in all colors and divisions. 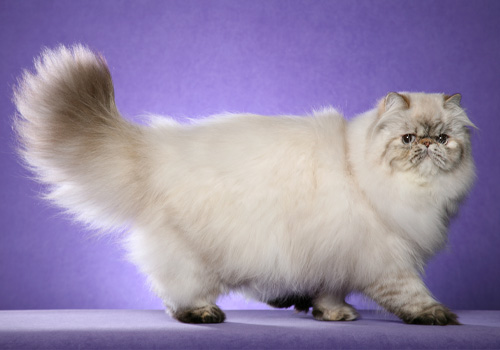