Somali at a Glance 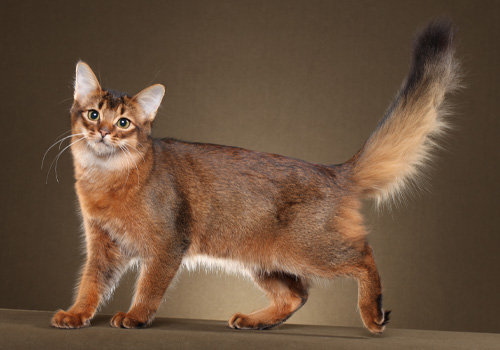 The Somali is the longhaired cousin of the Abyssinian, named after the country, historically known as Somalia. Loyal and affectionate, they are wonderful companions interested in everything and anyone around them. Their soft coat is easy to maintain. Find out more about this breed and if the Somali is right for you and your family.

Somalis are loyal, affectionate, highly intelligent and very interactive with their owners and their environment. No place ever goes unexplored, yet seldom do they knock anything off of a shelf or countertop. Their high energy and curiosity level make them highly interested in everything around them and what everybody is doing. They like a good view of their surroundings, so expect them to find them atop the refrigerator, doors, and bookcases.

Activity Level:
Saying Somalis show an intense curiosity in all that surrounds them is an understatement. They love toys and places to climb and explore. Agile and athletic, they can be found dashing up a cat tree or running on an exercise wheel. Entertained by whatever moves outside, bird feeders visible through a window are a must.

Engaging companions for people of all ages, they are happiest in the company of others. They are best suited with people of all ages who can spend ample time at home, including an older child who can train and play with them. Because they crave companionship, they will find ways to involve their family in their activities. They enjoy the company of another cat with a similar active temperament in the home for playing or cuddling. 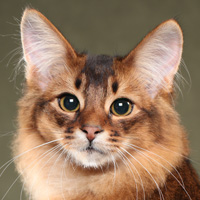 Grooming
Despite having long hair, Somali’s are easy to groom. Their soft, silky coat rarely mats or tangles. They do not require regular brushing however, many of them like it. They don’t need to be groomed professionally or bathed unless they’ve gotten into something messy. They should have their claws clipped every other week or more. Some lines are prone to dental issues like gingivitis, so begin brushing their teeth regularly at an early age with a vet-approved pet toothpaste.

Somalis are active cats with good appetites. Some love to eat and may overeat if food is left out, so free feeding is not recommended. They do well when fed a high quality food twice a day. Others are so active that they may need more calories than the average cat and access to high calorie food. Somalis love treats but they should be given in moderation.

While knowledgeable breeders do their best to test for and eliminate genetic health problems, cats may still develop certain diseases or conditions. Somali cats may have a higher risk for the following:

The Somali is the stunning long-haired cousin of the Abyssinian and is named for Somalia which borders Ethiopia, formerly Abyssinia, to represent their connection to each other.

The Abyssinian is one of the oldest breeds of domesticated cats, but its real ancestry is lost in time. Romantic tales call it the cat from the Blue Nile saying it is a direct descendant of the sacred cat of Ancient Egypt because it resembles the cats depicted in Egyptian murals and artifacts. Others believe British soldiers from Abyssinia (now Ethiopia) brought a cat named Zula home with them to England at the end of the Abyssinian war in 1868. So far, no documentation links Zula to the cats of today. Recent genetic studies identify the cats in the coastal area of the Bay of Bengal in India as the Abyssinian's potential forebears. The Abyssinian was developed and refined in Britain. An Abyssinian was shown in the World’s first cat competition in London in 1861. The first Abyssinian arrived in the United States in the early 1900s and they were first exhibited in 1909. In the 1930s an effort to develop the Abyssinian in the US began and it quickly developed into one of America's favorite breeds because of its expressive eyes, unique coat pattern and personality.

Somali’s were accepted by TICA for championship competition in 1979.

The overall impression of the ideal Somali is a medium cat, regal in appearance. The Somali is foreign in type. Males proportionately larger than females, the female being finer boned and usually more active than the male. The Somali shows firm muscular development and is lithe and panther-like in activity, showing a lively interest in all surroundings. The coat of the Somali has an iridescent quality. Coat pattern is genetically a form of agouti ticking with even, dark-colored ticking contrasted with lighter bands giving a translucent effect. The Somali is of sound health and vigor, well-balanced physically and temperamentally gentle and amenable to handling.