Korat Breed at A Glance 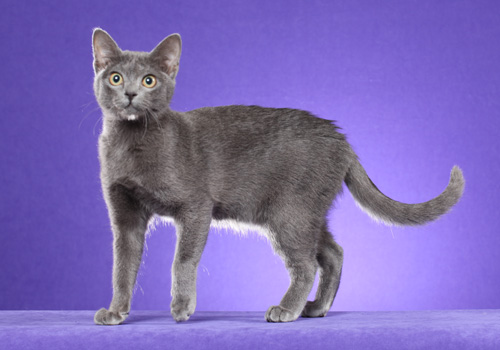 A breed of great tradition and history, the Korat is known for its heart-shaped head, face and chest. Charming, inquisitive, and always ready for fun, this easy-to-care-for breed gets along with everyone. Find out more about this breed and if a Korat is right for you and your family.

The Korat is a social breed that enjoys being with people. They require the companionship of their families and do not like to be left alone for long periods of time or go unnoticed. If ignored they will become withdrawn. They bond well with families and are affectionate. An attention-seeker, they will climb on your lap or arms to show their love.

Korats generally get along with other animals, but have a tendency to become jealous when other pets receive too much love from its owner. They love to play and are a good fit for families due to their loyalty and the extreme love they share.

While gentle, and never one to pass up curling up on a warm lap to read with a family member, Korats are also energetic, playful, and highly intelligent. They enjoy interactive play with their families and will fetch toys until their playmate tires of throwing. Challenge their brains with puzzle toys that reward with kibble or treats and teach them new tricks.

They love attention and like to think of themselves as the one in charge. An active and inquisitive breed, they like to explore every inch of their environment. Korats can jump high to find the best perch at the top of a refrigerator or cupboard where they like to survey their domain. 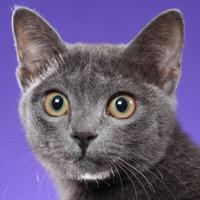 Grooming:
Korats are easy to groom due to their short-hair and lack of an undercoat. A brushing once a week in the summer is all that is needed to remove loose hair and keep their coat clean and healthy. In the winter, every other week is sufficient. Their hair does not float off when stroked, making them more compatible for those with cat allergies. Bathing is not usually necessary, nor is professional grooming.

Nutrition:
The Korat is not usually a finicky eater, but it is recommended that they be fed a quality dry food and a combination of fresh and canned food. Most Korats also enjoy cat grass, as it helps their digestion. It is not necessary to feed a raw food diet, but if one decides to, a veterinarian-approved food is always best.

Fresh water should be available at all times. Water bowls should be washed and refilled with fresh water daily. As with all cats, it is important to give your cat fresh, clean water daily so they don’t hesitate to drink. If you worry about your cat drinking enough water each day, here's a tip from some cat behaviorists: place the water bowl at least three feet away from any food. Cats’ noses are sensitive and an overwhelming smell of food may cause them to drink less. Filtered drinking fountains can also be used in place of a water bowl.

Health:
Korats are generally healthy and can live well into their 20s with proper care. The only known genetically inherited disease they may suffer from is Gangliosidoses (GM1 and GM2). In 1998 a DNA test was developed to screen out GM1 and GM2 carriers and the disease has now been almost completely eradicated. Knowledgeable Korat breeders now use only male and female cats that have been DNA tested free of the disease. If considering a Korat, ask your breeder if their cats have been DNA tested.

The Korat is an ancient cat from Siam (now Thailand) and the earliest picture of a Korat-sometimes known as the Si-Sawat cat-is in the ancient book known as The Cat-Book Poems in Bangkok's National Library, believed to have been written in the Ayudhya Period of Siamese history (1350-1767). King Rama V (1869-1910) commissioned the monk Somdej Phra Buddhacharn Buddhasarmahathera to copy the book onto special Khoi paper.

It is believed that Korats were shown in England in the late 1800s but they were probably entered as Siamese because that is where they were imported. They were listed as solid blue and judging descriptions can still be found.

In 1959, the first known pair of Korats (Nara and Darra), were imported into the United States by Mrs. Jean Johnson-the pair was gift to the Johnsons when her husband retired from the Foreign Service in Thailand. Many Korats have been imported since then and all Korats can trace their ancestry back to cats from Thailand.

They have had championship recognition in TICA since June 1979.

Korats can be traced back to Thailand and are often referred to as the “silver-blue cat with the Thai passport”.

The Korat is a symbol of good fortune and considered one of 17 good luck cats of Thailand.

The Thai government named the Korat a “national treasure”.

The Korat is an imported, natural breed. Outcross with any other breed is not accepted. It is rare, even in its native Thailand where paintings establish its existence as early as 1350. It is greatly cherished by the Thai people who regard it as a “good luck” cat. It is renowned for its affection and loyalty to its owners. Its general appearance is of a silver blue cat with a silver sheen, medium-sized, broad-chested, hard-bodied, powerful, and muscular. All smooth curves with large, wide open, luminous green eyes. The Korat is silver blue from birth to death. It can exist in no other color as a Korat. The Korat reaches maturity between 2 and 4 years of age. The breed enjoys considerable longevity, with many living beyond 20 years. Perfect physical condition and balance is typical, and expected, of the breed. The male is usually larger than the female and must look powerful and fit.

Additional information and an introduction to the Korat breed can be found in the links below: