Ragdolls at A Glance 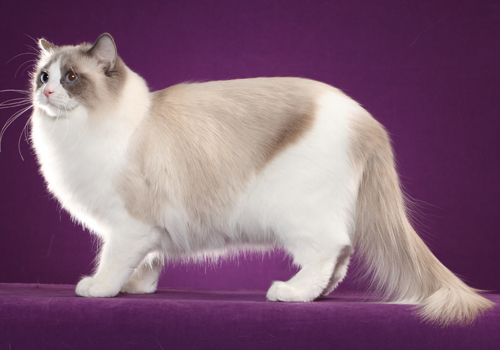 The Ragdoll is a large, affectionate, semi-longhaired cat with captivating blue eyes. One of the largest breeds in the cat fancy, the Ragdoll gets along well with children and other pets, including dogs, often living up to its name as it gets carried around the house in a child's arms. These sturdy cats have no extreme features and blend easily into the busy modern household. Find out more about this breed and if the Ragdoll is right for you and your family.

The Ragdoll is a relaxed, happy cat and, like a child's ragdoll, many of these cats will go limp in your arms and flop like a stuffed doll when cuddled. Generally, the Ragdoll is a loving, quiet cat with a laidback disposition. If you are looking for a very active cat or talkative cat, a Ragdoll probably is not the breed for your family. However, kittens and young adults can be very rambunctious, and most Ragdolls are always willing for some level of play.

Ragdolls are generally known for their tolerant attitudes with other animals, as well as with children. Often compared to dogs due to their friendliness and intelligence, they can be taught to play fetch.

Ragdolls are generally easy-going and calm, but they do love to play. Balls, catnip toys, and cat trees or other good scratching and resting areas are mandatory. Feather wands and other interactive toys are great for playing, exercise, and bonding time with the family. It is important to make sure your adult Ragdoll gets plenty of interactive playtime to help avoid excess weight gain. It is normal for them to have a thin layer of fat around their lower abdomen, but too much could indicate obesity. The best place to check for optimal weight and condition are along the spine and ribcage. Ask your veterinarian how to determine optimal body condition. 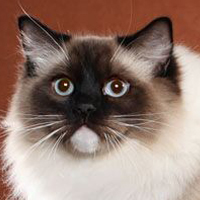 Grooming:
Ragdolls have a semi-long coat, which varies in length and density according to season. The coat texture is silky, soft, and plush, with some undercoat. They should be brushed regularly, once a week or more, to ensure good hygiene and proper coat care. Most Ragdolls enjoy the brushing and time with their family. It’s important to brush down to the skin and not just superficially over the top of the hair. A good stainless steel or “Greyhound” comb is best for getting all the way through the coat. Ragdolls can be taught from an early age to tolerate, and even enjoy, bathing and blow-drying.

Nails should be trimmed once a month. Your breeder or veterinarian can teach how to properly clip their claws. For a long and healthy life, it is important to keep your Ragdoll’s teeth free from plaque build-up with your annual veterinarian visit.

Nutrition:
Ask your breeder for recommendations regarding a good feeding routine and their experiences with different types of food (dry, canned, raw, ...).

It is important not to allow your Ragdoll to become obese. This can lead to serious health issues, such as diabetes. See “Activity Level” for information on how to determine optimal body condition for your Ragdoll.

As with all cats, it is important to give your cat fresh, clean water daily so they don’t hesitate to drink. Water containers can be non-tipping bowls, towers or fountains in plastic, glass, ceramic or stainless steel. If you worry about your cat drinking enough water each day, here's a tip from some cat behaviorists - place the water bowl at least three feet away from any food. Cats’ noses are sensitive and an overwhelming smell of food may cause them to drink less. Ragdolls love filtered drinking fountains that can also be used in place of a water bowl.

Ragdolls from reputable breeders are generally a healthy, hearty breed. A high-quality diet and annual vet check-ups are paramount for maintaining good health and longevity.

Ragdolls have the great fortune to have a DNA test for HCM (Hypertrophic Cardiomyopathy, a heart disease). HCM causes abnormal thickening of the heart and is the most common cause of heart disease in cats. When looking for a cat, be sure to select a reputable Ragdoll breeder that will do a HCM DNA test on all cats they are breeding.

Ann Baker of Riverside, California developed the Ragdoll breed in the early 1960s. A pure white longhaired cat named Josephine is believed to be the matriarch of the breed along with a seal point mitted male named Daddy Warbucks and a solid black cat named Blackie. Daddy Warbucks was bred to a daughter of Josephine named Buckwheat and her half-sister, Fugianna. These cats are the foundation of the Ragdoll breed.

Ann insisted Josephine's genes were altered at a nearby medical center where she was taken after being hit by a car. Litters born after her return from the hospital had the limp, loving personalities Ragdolls are known to exhibit, while those born prior to her hospitalization did not display the same traits.

Baker's breeding program consisted of a handful of breeders contracted as franchises under her guidance. As time went on, Baker became more eccentric and breeders broke away from her so they could continue to develop the highly affectionate and consistently patterned cats. Denny and Laura Dayton were among the breeders who distanced themselves from Baker and went on to play a major role in making the Ragdoll into a legitimate breed recognized by all the major registries. In June 1979, when TICA began, the Ragdoll was accepted for championship competition.

Maine Coon, Siberian, and Persian are other longhair cats with a temperament similar to the Ragdoll.

Ragdolls are often called “puppy cats” because they like to follow people around and many even love to play fetch.

Ragdolls are intelligent and often intrigued by the sound of running water. When you turn on the shower, bath, or tap, your Ragdoll may come running.

Ragdolls love to “flop” at your feet or on your lap for belly rubs and attention.

The Ragdoll is a semi-long haired, blue eyed pointed cat with a sweet personality. The Ragdoll grows large and heavy but is slow to mature and may not reach full weight and size for four years. Full color is not reached until three years old. The Ragdoll is muscular with little fat except on the lower abdomen fatty pad.

Additional information and an introduction to the Ragdoll breed can be found in the links below: