Russian Blue at a Glance 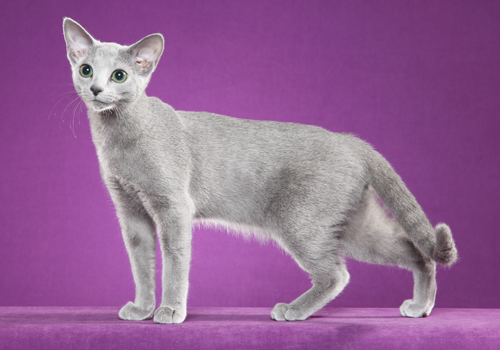 The dense, bright blue coat tipped with silver has been the hallmark of the Russian Blue for more than a century. While generally quiet cats, they will talk to you if you talk to them and develop a large vocabulary. Once the Russian Blue decides you are worthy of his attention, he is extremely affectionate and expects your loving attention to all its needs. They are playful, loving companions that get along well with children and other pets. The thick Russian Blue coat is easy to groom with brushing or combing once or twice a week. Find out more about this breed and if the Russian Blue is right for you and your family.

About the Russian Blue

The elegant and aristocratic Russian Blue is a sweet-tempered, loyal cat. They are known for their friendliness and intelligence, but are somewhat reserved around strangers. However, they are affectionate and very close to their family and tend to follow them around, sometimes on their shoulders.

Observant and persistent, Russian Blues can be very vocal, and will use their voice to converse back-and-forth and communicate with others. They thrive on structure and don’t adapt well to change, such as varying meal times or unknown visitors.

Playful and loving companions, they get along well with children and other pets. They can be left home alone without incidence, making them well suited to apartment living.

Russian blues are a highly intelligent breed that requires physical and mental stimulation. Smart and observant, they can be taught to play fetch and do tricks, including how to open doors and drawers. Challenge their brain by teaching them tricks and providing puzzle toys that will reward them with kibble or treats when they learn how to manipulate them.

They are especially fond of retrieving, jumping, and climbing to high places where they can study people and situations before making up their mind about whether they want to get involved.

While very social, they also enjoy alone time and will seek a quiet, private nook to sleep. 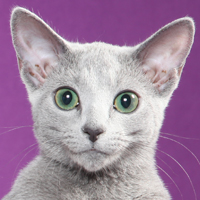 Wipe the corners of the eyes with a soft, damp cloth to remove any discharge. Use a separate area of the cloth for each eye so you don’t run the risk of spreading any infection.

Check their ears weekly. If they look dirty, wipe them out with a cotton ball or soft damp cloth. Avoid using cotton swabs, which can damage the interior of the ear.

As with all cats, brush their teeth weekly to prevent periodontal disease and trim their nails every couple of weeks.

Nutrition:
Russian Blues are known to have a healthy appetite. It is important to make sure they don’t overeat by keeping them on a regular feeding schedule and avoiding too many cat treats.

Health
Russian Blues are considered overall a healthy breed. They are also known for their longevity, with it not being uncommon for some to reach twenty-five years of age with proper care and regular visits to the veterinarian.

Russian Blues are also known as the Archangel cats. While their silver tipping and green eyes certainly makes them look like angels, the Archangel name was given to them after their point of origin--the Russian port of Arkhangelsk on the White Sea about 150 miles south of the Arctic Circle. The cats boarded the boats with the sailors and came to other parts of Europe.

The first cat shows in England in the 1880s included Russian Blues. For a while, all blue shorthaired cats competed in the same class however, in 1912 the distinctive cats from Arkhangelsk with their large eyes and ears were assigned their own class called the Foreign Blue.

The war had an impact on cat breeding and on the Russian Blue cats. After the war, breeders sought to revive their lines outcrossed to cats that resembled the Russian cats. Some English breeders chose to use the blue British Shorthair to ensure they kept the pale plush coat. Other breeders chose to use blue point Siamese to ensure they kept the elegant foreign body with its long fine legs and to preserve the distinctive head with its large ears and eyes.

The Scandinavian breeders were also working with outcross cats using Siamese and a blue cat from Finland but their cats had short tight dark coats and magnificent emerald green eyes set like jewels in the triangular head.

Russian Blues came to North America in the early 1900s however serious breeding programs began much later. The North American breeders imported cats from both England and Scandinavia and worked to combine the best features of each into today's modern Russian Blue. Today's Russian Blue has emerald eyes and a pale blue coat frosted with silver and the angelic smile that is a distinguishing feature of the breed.

TICA recognized the Russian Blue for championship competition in 1979.

Some people believe Russian Blues descended from cats of the Russian Czars.

Russian Blues are sometimes called “Archangel Cats” after their point of origin in the Archangel Isles.

In the movie Garfield: The Movie, Arlene is portrayed by a Russian Blue feline.

Felicity, a character in the novel and film Felidae, was a Russian Blue cat.

In the comic Two Lumps, Eben and Snooch are portrayed as Russian Blues cats.

The Egyptian Mau is the only natural domestic breed of spotted cat. The body is graceful, showing well-developed muscular strength. It strikes a balance between the heftiness of the cobby and svelteness of the oriental types. It is an alert, active, strong, colorful cat of medium size. It should be well-balanced physically and temperamentally. General balance is more to be desired than size alone.