The Bombay is a sleek muscular cat with great big copper penny eyes and a shiny midnight-black coat that resembles black patent leather. The combination is spectacular and resembles the mini-panther that the late Nikki Horner had in mind when she began developing the breed in 1953. The Bombay is a man-made breed developed from crossing a black American Shorthair with a sable Burmese. These purring bundles of love want to be with you all the time and as close to you as possible, reveling in your company.

Nikki Horner had in mind a cat that resembled the black leopard of India and named the breed she developed from combining black American Shorthairs with Burmese the Bombay after the Indian city. She wanted a cat with the sleek, short tight coat of the Burmese in the darkest black from the American Shorthair lit up with eyes like new copper pennies. Her early efforts were unsuccessful but undeterred she kept trying to create her vision and the combinations she used beginning in 1965 led to success. Horner had been breeding cats since she was 16 and in the 1970s, when her creation was finally accepted for championship competition, she stopped breeding. Other breeders had fallen in love with the stunning breed with the fabulous personality and worked to keep the breed going.

Major influencers in the breed's progression and popularity were Herb and Suzanne Zwecker. They also developed new lines with new combinations of the Burmese with the American Shorthair. Shawnee and Road To Fame are found behind many of today's Bombays. TICA accepted the Bombay for championship competition in June 1979.

The Bombay combines the easy-going nature of the American Shorthair with the inquisitive, loving personality of the social Burmese. They love to be in your company and will greet you joyously at the door-and they will greet visitors with the same loving enthusiasm. Expect your Bombay to be as close to you as possible whether it is perched on your soldier as you walk around, rubbing round your ankles purring while you make supper, cuddled into your lap while you watch TV or read a book, or snuggling up against you under the covers in bed like a hot water bottle. The Bombay loves the entire family and is particularly good with children since it is always ready to play. It also gets on well with other family pets given the proper introduction. Their craving for company means they are unhappy if let alone for long periods so consider getting another cat if you will be gone most of the day.

The Bombay comes in one color-black; but the deepest, densest black imaginable and with a high gloss sheen. The large eyes are anywhere from a deep, rich gold to copper - just like new copper pennies. The gleaming coat is tight and short and hugs the muscular body so you can watch the muscles ripple as this mini-panther stalks an imaginary prey in the living room. They are a medium-sized cat with a robust bone structure to support the powerful muscular body and are surprisingly heavy for their size. The head is rounded with no sharp angles and the large eyes are wide-set giving the face a sweet expression. The ears are medium sized, set well apart and sit tilted forward.

The short coat is very tight and sheds very little so it does not need much maintenance. An occasional bath will help keep the coat sharp and list any loose dirt while a quick rubdown with a rubber brush will remove any loose hairs. The palm of your hand as you lovingly stroke your mini-panther imparts a little natural oil that will help the sheen of the coat. For tip-top shine, a quick polish with a chamois is all that is needed. 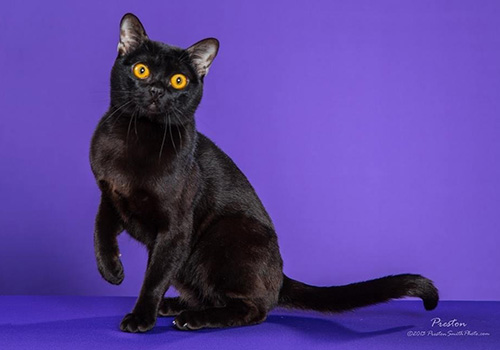