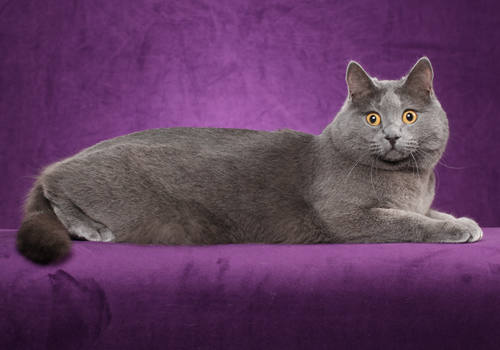 Known for their pumpkin-colored eyes, the Chartreux is an attentive and gentle companion. These incredible cats have a face shape that causes them to appear to be smiling. They are intelligent cats with lightning fast reflexes, which makes them especially fun to watch. Find out more about this breed and if the Chartreux is right for you and your family.

The Chartreux is an old breed that is a balance of contrasts. With its sturdy, robust body and fine-boned legs, the Chartreux is often described as a “potato on toothpicks.” It is one of the few breeds to come in blue only. These are cats that want their feet firmly on the ground. While playful and intelligent, these engaging cats are not one for hijinks or flying through the air. They have a short, thick coat that requires regular combing.

Activity Level:
Like most cats, the Chartreux loves to climb, and has also been known to perform acrobatic acts as they chase a fishing pole toy. Playful and intelligent, they like to be challenged by learning new tricks and playing with puzzle toys that reward them with treats when they learn how to manipulate them.

The amiable disposition of the Chartreux make them great family pets. Their calm nature makes them suitable for staying home alone. They are good with young children, other pets, people living on their own and the elderly. 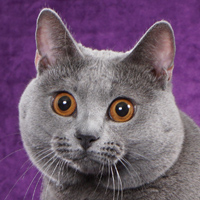 Grooming
The Chartreux has a thick, wooly coat that requires regular combing to avoid knots, especially when seasons change. They shed their undercoat a couple of times a year.

Chartreux cats do not have any particular nutritional needs other than good, quality, dry kibble.

The Chartreux is considered an overall healthy breed. However, it is recommended that their vaccinations and parasite treatments are kept to date.

The Chartreux is a sturdy French breed coveted since antiquity for its hunting prowess and its dense, water repellent fur. Its husky, robust type is sometimes termed primitive, being neither cobby nor classic/domestic. Though large, Chartreux are extremely supple and agile cats; refined, never coarse or clumsy. Males are much larger than females and slower to mature. Coat texture, coat color and eye color are affected by sex, age and natural factors.