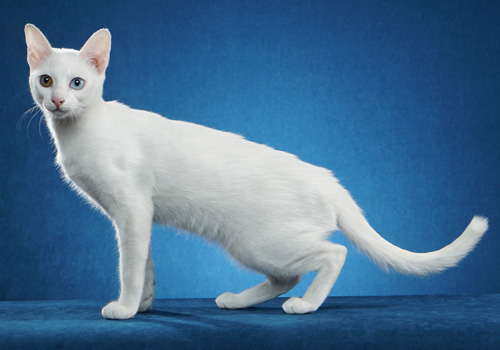 The Kahomanee (sometimes known as Khao Manee) means White Gem. While new to the Western world, they are an older breed that originated from Thailand. They have a distinctive heart-shaped head, high cheekbones and jewel-like eyes that can be odd-colored, with one being blue and the other yellow, or the eyes may be the same color. Their coats are short and easy to maintain. Find out more about this breed and if the Kahomanee is right for you and your family.

Graceful and curious, Khaomanee cats make wonderful companions. Their eyes may be blue or a mixture of one blue and one green or amber. They have been known to be very calm and relaxed, making them an ideal lap companion. Khaomanees have also been known for being very talkative and verbal – so be prepared for many back-and-forth conversations.

Activity Level:
Outgoing and playful, Khaomanees are very curious and athletic cats. Highly intelligent with an inquisitive nature, they will happily play fetch games and not thing twice about exploring every nook and cranny of the house. They are very sociable and love being around people.

They are a great fit with young children and other pets, including dogs. They appreciate the company of others and do not like being left alone for long periods of time . 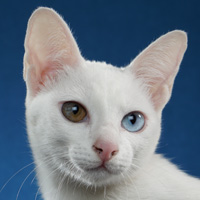 Grooming
When it comes to grooming, most Khaomanee cats are very low maintenance due to their short hair. Brushing once a week is recommended.

Khaomanee cats do not have any particular nutritional needs other than good, quality food.

The Khaomanee is considered an overall healthy breed. Some breeds of pure white cats tend to be prone to deafness in one or both ears. However, it is recommended that their vaccinations and parasite treatments are kept to date.

Several related breeds have their origins, ancient origins, in Thailand. The Siamese (Wichien-maat), the Burmese (Suphalak), the Korat (Dork Lao) and the Khaomanee. The first three breeds are well-established in the West but the Khaomanee has remained a well-kept secret in its native Thailand. Like the other breeds, we find references to the Khaomanee in the Tamra Maew (an ancient collection of Thai cat poems from 1350). Although in that text, it is called the Khao Plort. While the eyes were originally referred to as the color of mercury, the eye color was changed to reflect the odd-eyed cats that were considered lucky and also to have the yellow eyes like canary diamonds that breeders also favored.

TICA accepted the Khao Manee for Registration Only status in May 2009 and in September 2011 moved to the next step in gaining full breed recognition, Preliminary New Breed, effective May 2012. In September of 2015 the Khao Manee was accepted for Championship in TICA.

The ideal cat of this breed is a medium-sized cat of semi-foreign type, descended from and resembling the native Khao Manees of Thailand. It is a shorthaired, completely white cat with odd-colored eyes, or same-colored eyes. Indeed, the original eye color of the breed may have been limited to blue.