The exotic-looking Ocicat stops people in their tracks and steals their hearts. An impressive muscular spotted cat with the look of the wild, the Ocicat is a man-made domestic cat that adds a touch of the exotic to your home. They are powerful cats that look ready to stalk their prey at any second-their toy mouse, that is! The jungle look with the amenable personality of the domestic, these spotted cats never fail to make an impact with all who meet them.

Virginia Daly (Dalai) created the Ocicat by accident in 1964 when she was trying to develop a Siamese with points the same color as an Abyssinian. She bred a ruddy Abyssinian male carrying cinnamon named Dalai Deta Tim of Selene to a large seal point Siamese female named Dalai Tomboy Patter. The resulting kittens were all phenotypically Abyssinian and she kept a female from the litter that she named Dalai She. Virginia Daly bred Dalai She to a chocolate point Siamese named Whitehead Elegante Sun. That litter included the expected Siamese with Abyssinian points. She repeated the breeding and this time there was a surprise-a lovely ivory kitten with golden spots that she named Tonga. Her daughter declared he looked just like an Ocelot and wanted to call him an Ocicat-thus the new breed was named. However, a new breed was not the goal and so Tonga was neutered and placed in a loving pet home.

Corresponding with noted geneticist Dr. Clyde Keeler, Mrs. Daly mentioned Tonga. He replied saying he was interested in working with breeders to produce a cat similar to the extinct Egyptian Spotted Fishing Cat and suggested Tonga be bred back to his mother. While Tonga could not be used, Virginia Daly repeated the breeding and produced a tawny spotted male she named Dalai Dotson for use in the new project. The next step was to introduce the American Shorthair to the mix for the boning and substance-and to introduce silver. In 1966, she became the sole supporter of an elderly aunt and the Ocicat had to wait until the early 1980s. Other breeders also became fascinated by the spotted cats and developed new lines. Eventually the breed moved forward and TICA granted the Ocicat championship status in August 1986.

The Ocicat may look wild but it is absolutely devoted to its family. They are confident cats and are outgoing with visitors, eagerly checking out the chance for a game or a lap to curl up on. They are bright cats and will quickly learn to play fetch-but beware, they love their toys and can be possessive of them playing tug-of-war If you try to take them away. They are full of energy and their powerful grace easily lets them leap to high places. They are adaptable cats who easily learn the household rules however their social nature means they are unhappy if left alone for long periods. A busy active household suits them to a T.

The Ocicat comes in one pattern, spotted, but a number of different colors: Brown (Black), Chocolate, Cinnamon, Blue, Lilac and Fawn plus the silver version of these colors. The rich shades resemble the rich tones of the jungle cats and the shimmering silvers add a touch of glamour. The large thumb-shaped spots cover the body and are arranged in a classic bull's eye pattern. Occasionally, a full classic tabby will appear, but these are ineligible for competition. Each hair has several bands of ticking.

The mature Ocicat is a large cat with a powerful, sleek semi-foreign body of solid muscle dressed in a short, tight spotted coat. The athletic males weigh between 9 and 14 pounds and the graceful females 6 and 9 pounds. The large almond-shaped eyes are angled slightly adding to the cat's exotic look. The legs are medium in length with a solid feel to them to support the lithe, athletic body. Overall, the impression is of a cat ready to spring into action.

Ocicats have low maintenance coats and is kept in top condition by running a rubber brush over it weekly to remove the dead hairs and then a polish with a chamois to add some shine. If you decide to bathe your cat, use a bronze-tone shampoo for brown, chocolate and cinnamon spotted tabbies; a pearl-tone shampoo for blue, lilac and fawn cats; and a whitening shampoo for silver Ocicats. These shampoos highlight the vivid tones of your cat. 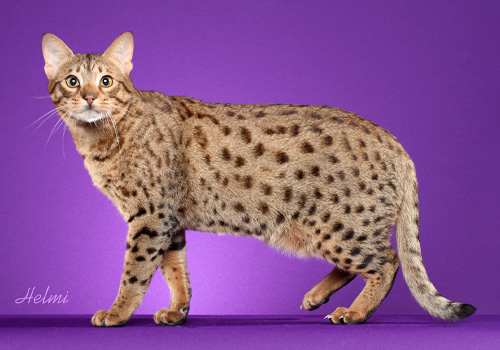