Reminiscent of the wild cats, the American Bobtail is a medium-large to large, naturally occurring short-tailed cat, native to North America. It is a well-muscled, solid cat with the power and grace of an athlete. It has the gaze of the hunter and the rolling gait that, along with its naturally bobbed tail, give it the resemblance to the wild cats but with the loving affection and intelligence of the domestic cat. No two tails are identical so they are truly the hallmark of the individual and are proudly held above the back when the cat is alert, often wagging to express the cat's mood. Developed by nature to survive in its native environment, the American Bobtail has above average intelligence and is a breed of moderation rather than extremes taking up to 3 years to reach full maturity.

Although the Bobtail has been in America for many generations, the true development of the breed began in the late 1960's. Every breeder of the American Bobtail has heard the story of Yodi, the patriarch of the breed. John and Brenda Sanders, a young couple, were vacationing in the southwest. They were driving through an Indian Reservation in Arizona when they discovered a brown tabby kitten with a short tail and decided to take their new pet home to Iowa. When Yodi became of age, he romanced the couple's female cat, Mishi, a non-pedigreed domestic color point. The resulting kittens inherited Yodi's unusual short tail. The kittens soon caught the eye of family friends, Mindy Shultz and Charlotte Bentley, who saw the possibility of a new breed of felines. Using several of these bobtailed kittens and outcrossing to a longhaired color point, they produced the first true American Bobtails.

In 1989, TICA recognized the American Bobtail as a naturally occurring breed of cat. The foundation stock of this breed comes from feral cats possessing a natural short tail from different regions of the United States and Canada. Most breeders no longer use feral bobtailed cats in their breeding programs.

The American Bobtail is a great family pet who attaches itself to the whole family, not just one person. The breed gets along with children as well as other pets, including the family dog. They want to be with the family rather than being alone. They have a subtle personality which is affectionate and loving rather than demanding or in your face. Most are moderately active without being either a "couch potato" or a "perpetual motion" machine. They can easily be taught to "walk" on a leash and play fetch.

The American Bobtail comes in any color and pattern. This means that they can be any pattern in black, brown, chocolate, cinnamon, blue, lilac, fawn, red, and cream, with or without white. This wonderful variety of colors and patterns comes in two (2) hair lengths: short and medium-long. The short hair is plush and reminds people of a rabbit pelt. The longer one is easy to keep with minimal combing.

The weight of males usually ranges between 12-16 lbs while females are 7-11 lbs. The weight should come from the cat being well-muscled and having substantial, large boning, rather than being overweight.

One of the most unusual traits is the cat's shortened tail. The desired length of the tail should be a minimum one inch and a maximum not longer than the hock. The tail mutation gene is not a controllable gene resulting in the different tail lengths of each kitten in the litter. 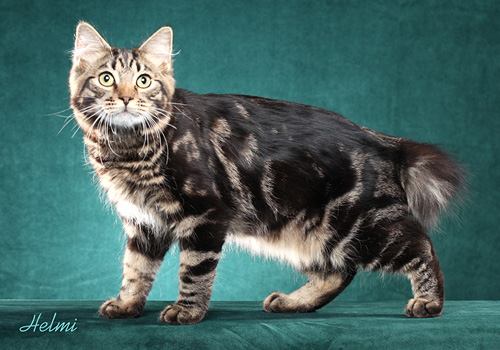